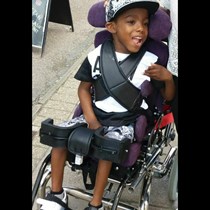 They say a parent should never have to bury their child. Never has a truer word been spoken, believe me.
I buried my beautiful five year old son, O’Ryan Simpson, on the 9th of August 2017, after he passed away suddenly in his sleep.
O’Ryan was a fighter since a begging of his life he was born prematurely, at just 29 weeks and 3 days, but due to two ongoing cases of medical negligence a month after his birth left him with a brain damage he had cerebral palsy with dystonia which affect all his muscles and his mobility.
He never complained though he had a lot of amount of different physiotherapy and hydrotherapy. He was always smiling, even on a bad day, and he was determined to do everything other little boys could do like crawling, sitting and walking.
To honour his determination, I would like to do something very special for his first anniversary and erect a memorial monument at his grave called "NO WHEELCHAIR IN HEAVEN"which demonstrates how the spirit is freed from the limitations of the physical body. (Please see the picture on my profile.)
I have had to get special permission from the cemetery to do this and it is only now that I have been given the go-ahead.
I’m a single mum and it would mean so much for me to be able to have it in place for O’Ryan’s first anniversary.
I thank you in advance from the bottom of my heart for any help you can give me in achieving this to finally make my son’s dream come true to "WALK IN HEAVEN" and also raise awareness of Sudden Unexplained Death in Childhood (SUDC) for children with cerebral palsy in our society.