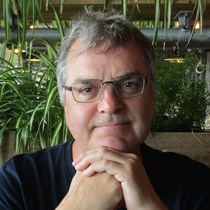 Weʼve raised £3,583 to Pay for Frank Key's funeral costs and organise a splendid memorial event in his honour.

Frank Key died suddenly on Friday 13 September and as you'd expect with such a true and truly great artist there's no money to pay for his funeral costs. Hence this page. Frank has been variously described as the person who wrote more nonsense than anyone who ever lived, as the sole creator of a beguiling and bizarre parallel universe, as someone who exuded a powerful whiff of industrial archaeology, and more simply as a genius. Through his astonishing writings (30+ publications over 33 years) and his weekly "Hooting Yard On The Air" broadcasts on Resonance FM (700+ episodes from 2004), he engaged and delighted a wide, enthuasiastic and sometimes gobsmacked audience. Frank was also an illustrator, narrator for podcasts and films, a good friend... all the things you'd expect from someone so wildly imaginative, single-mindedly creative - and so generous with his art. Now's the time for us to be generous and stump up the dismal pile of cash that is needed to pay for the great man's send off. Anything left over will go towards a memorial event to be held later this autumn. Thank you!

I met Frank via the Recommended Records Quarterly, mid-80s. With Andy Hopton as Counter Productions I distributed the works of Malice Aforethought Press. I wrote "Derek the Dust-Particle" which FK illustrated. And I invited him to contribute to Resonance FM, where I still work.