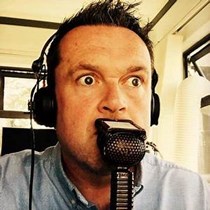 Weʼve raised £110,683 to help the family of freelance journalist and broadcaster, Henry Hope-Frost, who tragically lost his life while riding home from work

Henry Hope-Frost, the freelance motor racing journalist and commentator, was tragically killed in a road accident on March 8th. This page has been set up in memory of Henry and to provide some financial support for his wife and three young sons, aged three, six and 12.

Why was the target £38,000? Because people don’t suffer from ‘proper fever’ until their temperature rises above 38ºC. Henry would have been amused by that, and even though the money raised to date is more than double that early target, we will continue to keep this page active to allow as many people as possible to pay their own tribute to HHF.

Henry's family have been overwhelmed by the generosity and kind comments provided by friends, colleagues and so many more who simply enjoyed his work or were touched by the story. For everybody, it has come as no surprise that there has been such a social media storm of love for the legend that is HHF.

Henry infected everyone around him with his “incurable and debilitating fever”. His words, not ours. His love of everything fast and loud was the fuel for a magnificent career; cars were the moving parts in his turbocharged V12 of a life. Truly, Henry loved anything and everything that went like the clappers when the lights went out and didn’t stop until the chequered flag fell.

And how he turned this passion into something special. People around the world loved Henry’s infectious enthusiasm; colleagues and race fans recognised his unwavering professionalism; nobody at all could fail to be touched by his easy charm and rascal’s humour. And yet, for all of that, racing was only the second most important thing in Henry’s life. His family was what always mattered the most.

HHF, all of us would love to help make sure Charlotte and the HF Junior Team have just a little less to worry about right now...

This page was set up by Fergus Campbell, Garry Martin and Adam Waddell.

This page was set up immediately after Henry's tragic accident, on Thursday 8th March, by Fergus Campbell, Garry Martin and Adam Waddell. All three were long-standing friends and colleagues of Henry's.