Weʼve raised £33,577 to give Lewis some of the things we take for granted

We are raising money for a young boy very close to our hearts. Lewis White. We want to help to provide him with all of the things that we take for granted every day, things like access to a bath or shower and a comfy chair to sit in the lounge to enjoy some family time. Lewis is a 14 year old who has a remarkable story, having gone from being a healthy little boy to now being unable to move independently, talk or feed and can only communicate by blinking. Having spent a significant portion of his life in Alder Hey hospital after suffering a stroke at the age of 7 and associated life threatening complications, he has been home since September 2020 but can now only access 2 rooms due to the size of his wheelchair and upsettingly has no access to any bathroom facilities within his own home.

Lewis is the toughest, most determined boy his friends and family have the honour to know, he fights every day to gain more movement and we want to help him and his parents to not have to fight to get him access to all of the things that will make him more comfortable and aid his rehabilitation as well.

Please take some time to read Lewis’s story below to get a tiny insight into the brave boy he is and the challenges he has had to face so far in his relatively short life.

We will be posting various fundraising activities over the coming weeks and months and the Just Giving page is live for any donations, no matter how small, they will go directly to Lewis to improve his quality of life and provide the basic essentials that we all take for granted.

Thank you for taking the time to hear Lewis’s story. 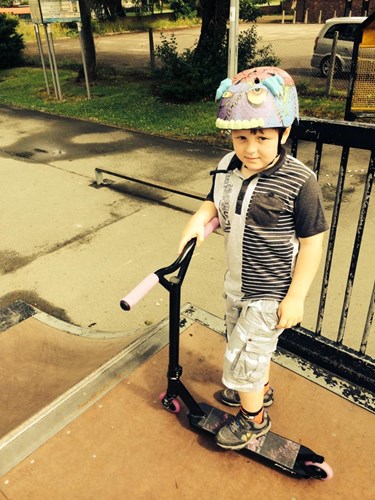 Lewis White was born in April 2007 to mum Sharon and dad Daniel. A healthy baby boy who grew up enjoying a whole range of activities including swimming and Taekwondo but his favourite by far was his scooter (or pretty much anything with wheels)! In 2014, at the age of 7 years old, everything changed for this family when Lewis suffered an acute left middle cerebral artery stroke, which affected the right side of his body rendering him unable to walk, talk or even eat. Unbeknown to the family, this was to be Lewis’s first experience of the wonderful care under the experts in Alder Hey hospital where he spent four months relearning how to talk and eat and eventually was able to walk again. This gave us an early insight into Lewis’s fighting spirit, coming back from the stroke with such determination! 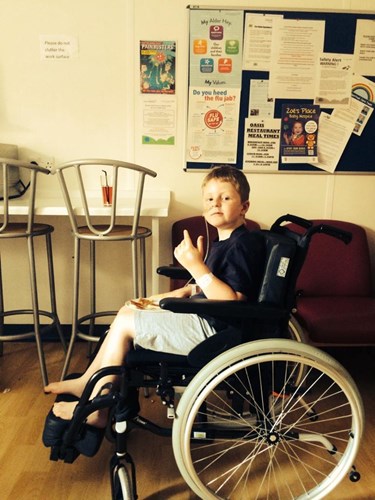 Whilst undergoing further tests in the hospital, it was found Lewis was anticoagulant positive and started on warfarin to thin his blood but worse news followed when they declared he was suffering with a very rare vasculitic disease called Pan Vasculitis which affected his brain, liver, kidneys, spleen and bowel which without treatment would result in organ failure. So after the efforts in his recovery so far, he then began on chemotherapy and was placed on a high dose of steroids for seven months which thankfully appeared to stop the disease in his organs. This victory was short lived when the disease returned the following year but this time in his brain resulting in him adding to the concoction of drugs he was taking with immune suppressants to try and control the disease and additional drugs to control high blood pressure too.

Lewis, being the fighter he is, still continued with school as much as possible throughout all of this treatment and loved his time spent at his caravan with his family and friends – he would happily pay the ultimate penalty of spending a few days recovering from the exhaustion to spend a Saturday afternoon running around with his friends, playing in the river, playing football and laughing around the fire at night toasting marshmallows. 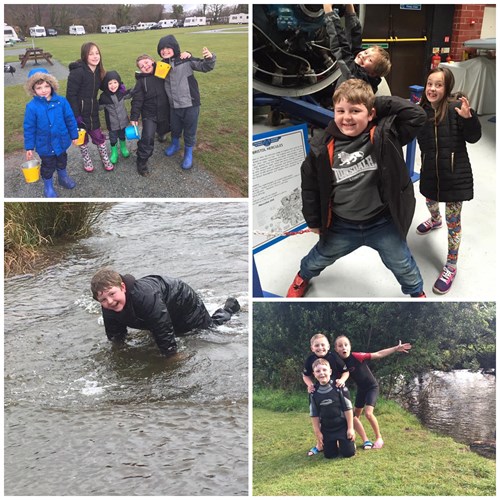 Lewis continued to have regular MRI scans and tests over the years providing the family with assurances that his condition was stabilising and at some point even recovering, however at the beginning of 2019 a routine MRI showed that whilst the Pan Vasculitis was no longer active, it had caused damage to the blood vessels in his brain and these were deteriorating. He was losing the blood flow in both sides of the front of his brain. This was causing him to have mini strokes which would eventually cause larger strokes. He was getting increasingly tired by small periods of activity and no longer had the energy to attend school full time.

The only treatment that could be offered was for him to have revascularisation surgery, on both sides of his brain. This was a very rare operation anyway and would only usually be considered to do one side of the brain at a time but Lewis’s situation demanded more urgent action. In November 2019, he underwent a ten hour surgery under the care of a specialist team from Manchester who came to Alder Hey to perform the operation which took the main artery from the side of his head, removed a piece of skull and connected the artery to the surface of his brain on both sides to try and improve the blood supply. Lewis came round after the surgery, but unfortunately that night he suffered a further three strokes, this time affecting the left side of his brain and his speech. He was placed in intensive care for a week and then transferred to a ward in Alder Hey for rehabilitation. He again lost his speech and movement but two weeks later he began to talk, asking his mum if he had had another stroke, and his cheeky giggle returned – he looked forward to his physio everyday so he could learn how to use his left arm and walk again. Once again he amazed everyone there with his determination. 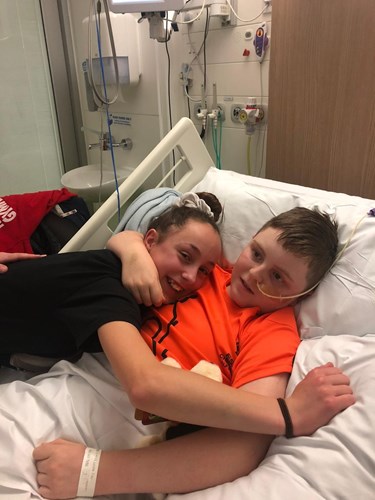 As seems all too consistent in this story, following on from triumph came tragedy and this time yet again was no different when on the 28th November 2019 the artery that had been used on the left side of his brain in the surgery tore, resulting in an acute severe haemorrhage which shunted his brain to the right side of his head. Lewis was rushed into surgery in the early hours and his parents were told he may not survive. Following the surgery, Lewis was placed in an induced coma in intensive care and was intubated, at this point it wasn’t known how much damage had been sustained and whether Lewis would be able to breathe on his own. If the bleed had happened anywhere other than in the hospital, the chances of survival would have been slim to none yet he remained in intensive care until the week before Christmas and after many difficult episodes, amazingly he started to breathe on his own as they lowered the ventilation. This was the glimmer of hope everyone had been waiting for and the chance for Lewis once again to prove there was no stopping him. 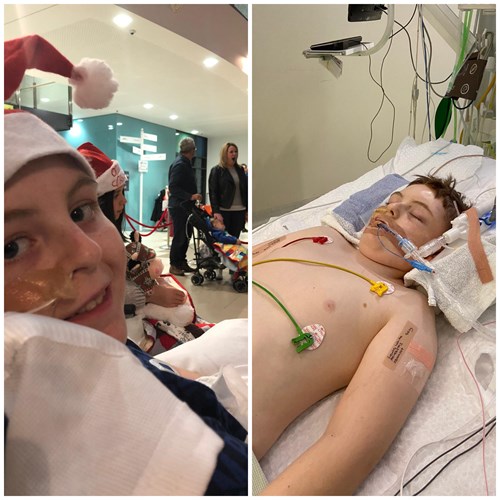 An MRI scan at the beginning of 2020 showed that the bleed had caused Lewis to suffer severe brain damage and is unlikely to make much recovery so in June he was transferred from Alder Hey hospital to The Childrens Trust in Surrey for rehabilitation before returning home in September 2020 with his Dad as his full time carer and his Mum juggling work and caring for Lewis. Lewis remains in a minimally conscious state although he is making small improvements. He is unable to move his limbs voluntarily and is registered severely sight impaired (we think he can see light/dark and possibly colours). He is fed and given his meds by tube directly into his stomach. We don’t know what he is aware of but he does communicate by blinking. 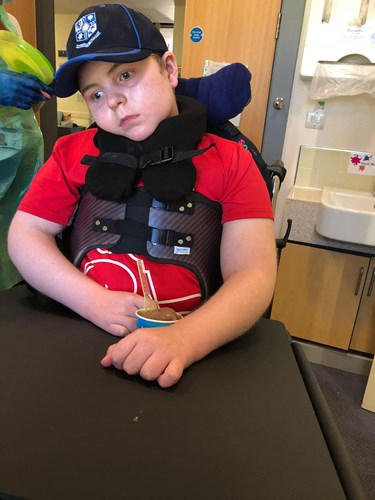 Lewis also now suffers from a condition called dystonia, which causes his muscles to contract uncontrollably and can be very painful. It was that severe, that whilst still in Alder Hey the muscle spasms caused him to suffer a broken hip. Water really helps his muscles to relax and Lewis seems to enjoy having his arms and legs moved. Lewis is visibly more relaxed and comfortable during and after a bath, but right now he has to travel to Hope House (43 miles away), then return home in the harsh cold rather than being able to enjoy one in his own home and then relax.

His family simply want Lewis to be able to do what other children do, sit together and watch a movie, enjoy spending time in the lounge or kitchen together however this proves difficult as he is only able to sit in his wheel chair or in bed. He can’t hold his trunk or his head up, so he needs to wear a spinal brace and neck brace to sit in his wheel chair which is not comfortable for long periods of time. His parents would ideally like him to have his own seat within the family lounge so he can be comfortable with them and spend more time in other areas of the home rather than spending the majority of his time in his bedroom.

There is an endless shopping list of items which can help Lewis and improve his quality of life however as we are sure you can imagine, all of these items are very specialist therefore the costs run into thousands. A basic bath (without lights and sounds to stimulate his senses) costs in excess of £11,000 then a changing table is required on top of that for £4,000. There are doors to be widened, new flooring required, new chairs…..the list goes on and on and whilst there is some help to come from the council it will never cover everything needed just to make life more comfortable and easier for Lewis and his family as they simply can't do this on their own……that is before they even think about making the garden accessible for him so he can have some outside space to enjoy.

Any donations will go directly to fund specialist equipment and alterations to the home. Some local businesses have already committed to supporting structural alterations or donating products/services but further offers of support or services would be welcomed from local businesses or trades people.

Together we aim to be Lewis's Dream Team.

We simply cannot believe that we have made it beyond our original target of £15k let alone beyond the revised one of £25k - our supporters are absolutely amazing and are already making such a difference to Lewis and his family. THANK YOU ALL SO MUCH 💙