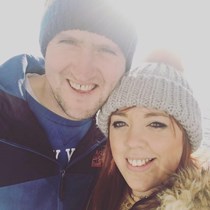 Weʼve raised £495 to help fund Brian's stay at PJ care where they are helping him walk again after suffering a Brain Haemorrhage and stroke leaving him immobile.

For those of you that know Uncle Brian, you will know most of this story and why we are raising funds to help him. Not only does he need it, but he really deserves this help as does Aunty Carole who has been by his side making sure all his needs are met from day one.

In May last year, Brian had brain haemorrhage after returning from Wembley after watching a football game, he was taken to Kings Lynn hospital where they told Carole (his wife) he wouldn't survive.
He was then transferred to Addenbrokes in Cambridge where his family had to wait until the friday, for what only reason we believe was that he wasn't going to live. Fortunately Brian came through the op brilliantly, but a blood clot caused a stroke, leaving him immobilised and putting him into a coma, so another week of waiting to see if he would pull through and his blood pressure at 220.

After 4 weeks or so Brian was transferred back to Kings Lynn hospital where he had a blood clot on the lung this time, here he would receive physiotherapy as he could hardly even hold his head up.

Fortunately, but slowly getting better he was there for 8 weeks when he was moved to Norwich - 120 miles round trip for Carole. Doing well four weeks on but started deteriorating again, fluid built up around the brain so back to Addenbrokes to have a shunt fitted in his scull to drain it. He was then transferred back to Norwich after 2 weeks.

After a few minor things like falling out of his bed when he thought he could walk he started to improve in mobility and cognition. 7 months on he was moved to PJ care, Peterborough were he still is to this day.
He can now move his arms, one leg and do basic things, but still he still can't walk.

Last week the funding ended, If he comes home to soon he will regress and might not ever walk. So we need to keep pushing to keep him at PJ's until his left leg responds to the brain.

Please help us fund this care and help get him back to full health.