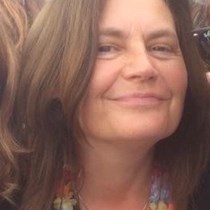 Weʼve raised £4,030 to help pay for the funeral of Julie Geraghty to allow her four children to say farewell.

This isn't easy but I've always believed honesty is by far the best policy - even if it hurts to the hilt. Sometimes there are no words. But sometimes you just need to try and do something.

You see, it's impossible to know how to deal with what's left behind when a much loved mother is suddenly found dead on New Year's Day having very sadly taken her own life. And we may never know why.

My sister in law, Julie Geraghty, was married to my little brother Thomas who also died suddenly in the same house 10 years ago. Back then my brother was found by his son David who is now having to come to terms with losing his mum too. As his Aunty, all I can do now is wonder how on earth to best help David and his brother Kevin and little sisters Grace and Harriet...

Hence this Justgiving page to raise funds for a funeral. Yes it's certainly something I never imagined I'd end up having to do. If I had the money to cover the cost instead I'd do it in a shot, but very sadly I don't. And neither do the children or Julie's family.

So, this is an attempt to raise funds to help in anyway I can but also to insert some kind of hope into what feels like a pretty brutal situation. It's an attempt to ensure there is enough money to support the children and arrange a funeral and farewell that Julie deserves - as a person, as a mother and as a human being who was struggling and merits the dignity in death we all deserve.

It transpires that Julie's will says she hoped one day to have her funeral in the same church where she was married in Retford (near Doncaster).The same church where my brother's funeral was also held. And her children want her to be buried in the same plot as my brother. But the difficult question now is how to raise the necessary money to make that last wish come true. The funeral arrangements have so far been delayed due to lack of funds and that feels heartbreaking.

So, any contribution towards making the funeral happen sooner rather than later will, as you can imagine, be very much appreciated by the family who are also doing all they can to try and pull the required £4000 cost of the funeral etc together.

Who knows, whatever amount is raised, perhaps this will also add hope and love in abundance to a situation where it is very much needed. And wouldn't it be amazing if this fundraising support also left Julie's four children believing that good things can and do happen too...

Much love and thanks in anticipation of anything that might come of this.