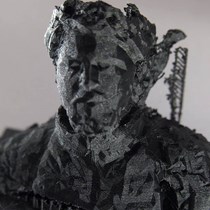 Weʼve raised £460 to Create a Scholarship fund for the remarkable Mohammed Kteish who dreams of becoming an architect and rebuilding Aleppo. www.futurealeppo.com

Amidst the destruction and violence of the Syrian conflict, Mohammed Kteish imagined a better world for himself and the children of Aleppo.

Gathering whatever materials he could salvage amongst the debris he began crafting models preserving the fallen architecture of his city.

These models were lost when he and his family fled Syria, but he began building again and now encourages others to share his dream by remembering their own cities and landmarks and reconstructing them - adding their own stories to the city that will one day become, Future Aleppo.

The project Future Aleppo (www.futurealeppo.com) is a Virtual Reality experience taking users inside Mohammed's city and encouraging them to rebuild from inside the simulation. We are taking Mohammed and the experience across refugee camps and communities to restore a lost sense of agency in the children caught up in the conflict.

This funding will be used exclusively to support Mohammed as he trains to become an architect and return to Aleppo to rebuild the city.

Hi my name is Alex Pearson and it is been my great honor to work with Mohammed. His work has been a huge inspiration to so many who have experienced his work and journeyed inside his city using Virtual Reality and I hope that we will be able to help him become an architect.