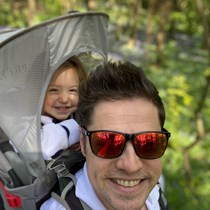 My name is Gareth and I have signed up to participate in my first ever White Collar Boxing match, to be held on 2 July 2022. I am doing this to raise funds for two causes very close to my heart: Southampton's NICU and the Priaulx Prem Baby Foundation (PPBF).

My daughter, Zara, was born on 12th October 2019, at 24 weeks and 3 days. She weighed 590 grams with her life support equipment on. I remember the first time I saw her as she was wheeled from the operating theatre to the NICU, intubated, wrapped in a small plastic bag, I had never seen something so small and fragile.

Zara began her long, slow road to recovery in the Southampton Neonatal Intensive Care Unit, my wife having been medi-evac'd from Guernsey a few days prior to her birth. Ultimately she spent 100 days in the Southampton NICU, with good days and bad days; it was a rollercoaster.

The staff at the Southampton NICU were incredible. Professional, compassionate and they helped us find small moments of joy, humour and comfort in an otherwise desperate and dark situation. For that we will be eternally grateful.

As I mentioned, we live in Guernsey, which lacks the specialist care needed to look after such a premature baby, and having flown over to Southampton I initially found myself living between hotels and B&Bs while my wife was in hospital, trying to figure out how we were going to stay near Zara while she recovered. That was when PPBF stepped in. Within a day of us speaking to eachother, they moved us in to "Aggie's burrow", a flat less than 100 paces from the NICU. We lived there for 3 months, spent Christmas there. It was a lifeline.

My daughter is now two and a half years old. She has a long way to go but she is doing so, so well and she amazes me every day. Southampton NICU saved my little girl; PPBF gave us the ability to remain by her side throughout that process.

So why boxing? Mainly because I am no marathon runner! I have done a little boxing training on and off for a little while now, but I have never really sparred with anyone. It would certainly be out of my comfort zone and for me if I'm going to step out of that zone, I want to know I'm doing it for a good cause!

So I have 8 weeks to get in shape, raise my skill level and I'll be stepping into the ring in front of about 1,500 people, for 3 rounds. I am incredibly nervous about it, so your kind donations will help me remember why I'm putting my chiseled features at risk!

Whatever I raise will be split equally between Southampton NICU and PPBF, thank you for reading and please, give generously!