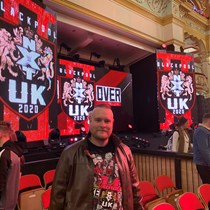 Thank you for taking the time to read this story of a very hard-working man devoted to volunteering named Frank Walker.

Frank was an active volunteer at the Severn Valley Railway, where he earned the nickname the ‘Gentle Giant’.  He was kind, hard worker who was extremely passionate about the SVR, undertaking many unglamorous tasks for little or no reward.  He was a very enthusiastic supporter of the restoration of GWR 2-6-2 locomotive No. 4150 and worked many hours on the restoration and fund-raising aspects of this project.

Frank was also a member of Bridgnorth Male Voice Choir of which he had been an integral and enthusiastic member since 1992, serving as Chairman, Librarian, Committee Member, Piano Mover and friend.

He also devoted time to volunteer at the Mind charity shop in Bridgnorth, giving his time to raise money for mental health charities.

It is only fitting that Frank be remembered for all the time he gave up volunteering and helping those in need and all money raised in his memory will go towards the 4150 Fund and the mental health charity Mind.

Frank is one of five siblings, three brothers and one sister.  A brother and uncle, he will be sorely missed.

Frank enjoyed spending some much earned downtime with his friends over pint at the SVR’s Railwayman’s Arms, and it is planned to have a memorial plaque suitably placed here so that his many friends can sit down and enjoy a pint with Frank whilst sharing memories for years to come.