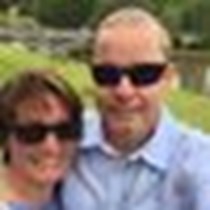 After our son George died, his friends were moved to organise a whip round for some flowers… and a snowball was formed. Soon the flowers became a memorial bench and then something much bigger. The same friends decided that they would have a football match…. but so many people wanted to play that it became a charity tournament and only three weeks after George died, hundreds of people came to the first George Heath Memorial Trophy, followed by a fundraiser in the pub where George worked.

Slowly, it became obvious that something more formal was needed, and we started the process of establishing a charity in his name to celebrate his life and ensure that his name lives on in the hearts of the many who were close to him and in the numerous and diverse communities where he was widely known and loved.

Since then we have continued fundraising and supporting the community that supported us through the very darkest of times. We won't ever be able to say thank you individually to all of the people who went out of their way to support us - but giving something back to our community is our means of doing just that. To date we have paid out over £13,000 - and more allocations are in the pipeline.

In the summer of 2016 just after George died, one of his best friends, Chloe, encouraged me to get running....and soon we were regular running mates - she is an inspiration, and better than medicine when it comes to talking through our shared grief....this is the first time I have ever taken on a sponsored run...and I'm hoping to raise some money for The George Heath Foundation in the process.