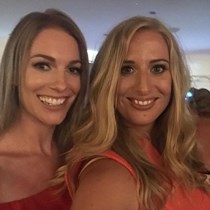 Weʼve raised £33,534 to send Gemma for alternative treatment to save her life!

So on Friday 30th June Gemma's worst nightmare suddenly got worse when she was cruelly given 1-3 months left in her battle with liver cancer along with the news the cancer how now spread to her lungs. She is now looking for alternative treatment with a matter of urgency to give her that extra time that she both wants and deserves!

This is her story so far - last summer at the age of 32, just 2 years after she married the man of her dreams, she was diagnosed with Hepatocellular Carcinoma (HCC) which is a rare type of cancer in the liver. After feeling unwell for a few months she went to her GP and was quickly diagnosed with the disease after several tests. Within just a few weeks she then underwent a liver resection to remove the half of her liver which had the tumours growing on it. Unfortunately very soon afterwards a scan revealed the tumours were growing back and she then began chemotherapy in a bid to rid them once more.

After recent scans showing the tumours growing back again she went today to be given the devastating news that the chemotherapy has not worked and her cancer has now spread into her lungs. Within the last month Gemma has adopted a vegan lifestyle and has been doing extensive research into treatments available. Currently we do not know which option Gemma will take but we need to raise as much as possible as quickly as possible to fund whichever option she may choose as time is not currently on our side! (We will update this page once Gemma has decided this)

Throughout this whole process Gemma has always had a smile on her face, a positive attitude and braved whatever news she has been given better than anyone we could ever imagine! Its now our turn to step up and help her in any way we can!

Please give what you can, share as much as you can and let's get the Gemma we all know and love the treatment she needs!!