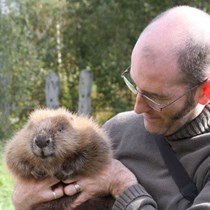 Weʼve raised £3,660 to support local communities, their forests & their frogs in Ghana.

There could be as few as 30 Giant Squeaker Frogs left in the world. This frog (big for a squeaker frog, but not actually that large!) is now only known from the Sui River Forest Reserve, Ghana. For ten years, Gilbert Adum has been working with local people, finding ways for them to have better lives without destroying the frog’s habitat.

Gilbert grew up a hunter in the north of Ghana, but he always had a fascination for amphibians. Education transformed his life. He studied the Giant Squeaker Frog for several years and then set up the 'SAVE THE FROGS! Ghana' charity in 2011. Gilbert now has a studentship for the globally-renowned Conservation Leadership masters degree at Cambridge University.

Gilbert's charity has two members of staff in Ghana, working with the community around this Forest Reserve. The charity helps local people take up alternative livelihoods – like beekeeping to produce Fairtrade honey – so they don't need to clear the forest to survive. A computer room in the village now offers life-changing educational opportunities. Local people are removing the invasive Devilweed (Chromolaena odorata) – which has spread into areas of forest previously cleared for temporary agriculture – and are busy replanting with native trees.

Watch this short film, narrated by David Attenborough, made after Gilbert’s work won The Whitley Award in 2016:

Gilbert has submitted a grant application to extend this vital conservation project. Hopes are high that this will be awarded in September, but the charity has run out of money now. Gilbert is desperate to keep the work going. If the staff have to be made redundant, it will take months to recruit and train new staff when further grants come through. Any break in the charity's involvement will damage the local community’s current confidence in this programme of economic development, frog & forest conservation.

That’s where we come in. The target amount we are fundraising for through JustGiving is essential so staff and office costs can be covered for this six month funding gap. If you can afford it, please make a donation. Without this, the Giant Squeaker Frog faces extinction.

If we can keep the charity going and you want to keep in touch with the work please email me at julianbranscombe@yahoo.com – I am staying in contact with Gilbert and will send updates to everyone who is interested.

I've worked in UK nature conservation since 1991. Ghana is wonderful but its people & wildlife face big challenges - see tinyurl.com/NCGhana for my full thoughts. My 2017 visit convinced me to support local Ghanaian conservation. I've chosen Save The Frogs Ghana for good reason!