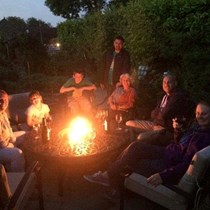 Weʼve raised £8,122 to Help Tessa to get life changing treatment for her MS. Lets get Tessa walking again.

I have produced this page to send Tessa to Mexico for a proven MS treatment that is not available in the UK. This treatment has a very high success rate and will hopefully improve Tessa hugely, (some even call it a cure) but if not it could stop her getting worse.

MS is an auto immune condition which means the body is attacking itself. With MS the immune system attacks the myelin sheath that surrounds the nerves, this blocks the messages from the brain and the suffer loses communication with parts of the body, sometimes even their sight & speech. Many with progressive & secondary progressive also suffer constant pain.

In Tessa’s case this has affected her balance and therefor her ability to walk. She has also lost some of the feeling in her hands and her coordination has reduced. She is becoming weak to the point she has difficulty pushing her feet into shoes. Further symptoms will possibly affect her as time goes by. Each person is affected differently.

There are many types of MS, remitting - relapsing is commonly what appears first which can be controlled with drugs. Unfortunately, Tessa first developed progressive MS where the symptoms cannot be lessoned by medication. She is now facing secondary progressive which is the final and most serious stage. The NHS offers no treatment for progressive MS. Only some medications to help which pain relief.

We are now anxious to get this treatment as Tessa is progressing faster now that she ever has. She is desperate to keep walking and at this point we don’t know how much longer she will be able to. This treatment is available to people like Tessa and is the only treatment available that has had positive results with progressive MS.

Tessa has been (as many of you know) an international competitor, she competed at the highest level on a horse bred for racing! If anyone told her it could not be trained she would do it! This determination to produce difficult or average horses along with her small size is I believe what has given her the deep knowledge and coaching ability, it has also show how stubborn and determined she is. Tessa has trained literally hundreds of people over the years, you very rarely have a conversation with her about riders without her having come across them or their horse before.

She is also known as a judge, last year judging at most of the regional finals then again for days at Stoneleigh. She is now often called upon to coach the judges spending many hours judge training.

MS caused Tessa to give up riding and sell her much loved horse in 2012. She would have been competing him GP later that year if MS had not taken this from her. She loved watching him go on the represent GB at young riders in the following years but it was painful also.

She then threw herself into judging being fast tracked straight to list 2 due to her experience. She also completed her BD level 3 UKCC – one of the first test ‘guinea pigs’ to do it. She never let MS slow her down and would find things to challenge her.

Walking is now very difficult for Tessa and she is now having many painful falls trying to stay independent. She has reduced the judging as she is unable to walk across arena surfaces and is afraid of falling. She describes it as “having a horse you fall off 3 times a week and very nearly come off several times every day. How confident would that make you feel week in week out?” I have to say I am very grateful that I don’t know but I can try to imagine and it would make me not want to leave the house!

Tessa is now finding traveling and teaching exhausting and I desperately need help to her get this treatment before she has to give up work and loses the independence she has left. The photo I have used is from the Junior Europeans this year where our horse competed. He will now be sold to make improvements to the house and allow her to have the time without working (and earning) that this treatment will require.

She will have to remain in a clean environment while she recovers, horses will be off limits for quite a while. She will be very weak and the new stem cells can take a few months to show marked changes.

We now just need to money for the treatment itself. The reason we have chosen Mexico is because the clinic has been offering this treatment for a long time and this gives us a lot of data to look at. 40% show marked improvement, 41% no further deterioration and only 19% show no difference. We also are able to speak to people who have been there for the same treatment and have watched their progress. It is a 28 day treatment which will involve stem cells being harvested from Tessa’s bone marrow. She will then have an aggressive form of chemotherapy which will destroy her immune system, the stem cells will then be reintroduced to create a new, MS free, immune system. It is much more complicated that that but I understand it as switching her off and then back on again! Following this medication is required every other month for a year which we can get in the UK at £900 each.

Results of this treatment have often been appearing online and in the national press, journalist and BBC war correspondent Caroline Wyatt wrote a blog for the Daily Mail having had the same treatment in Mexico. She has had significant improvement and now plans to start traveling again. Please help me if you can raise the funds to give Tessa hope again.

This will literally save her life, if she carries on deteriorating at the speed she is that is what will be taken from her. Every penny will make a massive difference. If you have known Tessa at all you will know what a strong person she is in her heart. She will fight to make this work if given the chance but she can’t do it alone. Let’s get Tessa back on her feet, and maybe even back on a horse!!!!