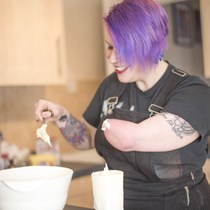 Heyyy I'm Sadie,
I was born without my left forearm and hand. I was about 3 years old and had a hook prosthetic with a pully system that went around my back and over my right shoulder which allowed the hook to open and close... Not the easiest way to make friends.
The hook could be changed for other "useful" attachments, there was a piece of metal with a rubber tip that was used for typing. It was awful and I refused to wear it.
Then came my bionic arm, it was heavy, the wire to the battery pack irritated me and it only had an open and close function which got stuck and was about as useful as a chocolate teapot. I swore off prosthetics at the age of 9.
Now twenty years later I've managed just fine without but have developed De Quervain's Syndrome in my wrist, it's chronic and agonising. I'm struggling with the most basic tasks. So I've decided I need a prosthetic. The NHS still doesn't offer much more than the things I had as a child. However Open Bionics has come up with the first medically approved 3D printed prosthetic. The Hero Arm! It really is amazing and being able to use my left without twisting awkwardly would be great, little things like being able to reach up from my sofa and turn the light on without having to stand up or carry two plates at a time imagine that?! But at £10,000 It's not within my budget. I started this page asking for £5,000. After having my first consultation the decision has been made to ask for the full amount as things are moving very fast and I have no idea how else to get the money. This target is ambitious and I don't expect to hit it but any help towards my goal would be incredible.