Grant Davies. We call him “Dodge”. There is a story of how he got this name: something about a rugby injury that left him with a “dodgy” hip. But Dodge is not dodgy at all. He is the nicest guy you will ever meet. He listens to you intently with those piecing blue eyes. And he asks you questions and is always really present. At times, when he has absorbed what you have to tell him, he will cock his head slightly, form a smile and begin with something like, “The thing is . . .”. He will then kindly offer you another perspective that is informed, full of heart and always optimistic.

Four years ago, Dodge was diagnosed with multiple myeloma. This is a rare form of cancer that attacks the plasma cells. These cells are found in the bone marrow and are an important part of the immune system. He has been through a lot since then: three years of chemo, two bone-marrow transplants, months in isolation. He has taken courses of medicine procured from India, he has lost his hair three times and he has submitted himself to a trial in China. He has been through horrific times and, along the way, the journey has been dark. But it’s also been amazing: he has been lifted up and carried along by incredible friends and family, and the most extra ordinary wife… and a nine-year-old super hero, nurse aid, adventure seeker and gaming fanatic – Oscar Davies!!

Yet, the cancer is still with him and the options to cure it are almost at an end.

What arguably remains his last, best shot at beating this disease is a trial he has now been accepted on at the Fred Hutch Cancer Research Centre in Seattle, USA. The trial, uses CAR-T immunotherapy. Read more about this below, but what is important is that these trials at The Hutch have seen fantastic results. Patients with the same cancer as Dodge’s have gone into remission!

That Dodge has got onto this trial at this time, after enduring so much, is near miraculous. It is bright and hopeful. It is Dodge’s last, best shot at beating his disease.

But time is now and the costs are high.

He must be in Seattle in early August to begin procedures leading up to the trial. And he must find the money to cover the costs.

Of course this money will help progress science and lead to a greater good, which is great. But this is about Dodge. It’s about beating his cancer. It’s about conversations with him long into the future knowing Dodge will be there, looking at you with those intent, blue eyes, cocking his head to one side and saying, “The thing is . . .”

We are spreading the word of this fund widely, to strangers, to everyone who might know Dodge, or might have known him before. He is, after all, unforgettable.

CAR-T involves extracting cells from the patient, modifying them and then reinserting them into the body so that the modified T cells begin to attack the cancer cells. This is considered far less invasive and destructive than chemotherapy.

With more trials, advances in treatment and further understanding of CAR-T / immunotherapy will help future patients.

Follow this link and watch a video in which Dr. Maloney, associate professor of medicine at the University of Washington, explains the CAR-T process. is CAR-T cell therapy the future of cancer treatment?

And this diagram gives an idea of what is involved in the process. 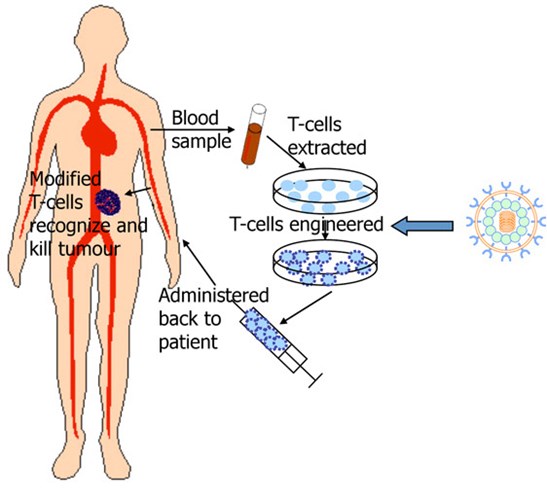