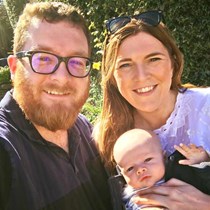 Weʼve raised £2,205 to help in the Battle against Battens disease, especially Ollie and Amelia of Poynton who's charity - Ollie's Army - we are raising money for.

This will be a charity squash match between two heavyweights in the whisky industry to raise money for two great causes. The charity I have chosen is Ollie's Army - http://olliesarmy.co.uk/the-story/ - and here's why... in his mother's words:

On the 9th September 2014 Ollie had his first seizure. Ollie had been to pre-school that day, on returning home Ollie developed a temperature. A trip to our local GP confirmed a urine track infection. Later that evening whilst bathing, Ollie had his first seizure. On pulling him out of the water we realised that he was no longer breathing. Ollie’s dad performed mouth to mouth resuscitation on his own son and brought our little boy back. Ollie was rushed via ambulance to our local hospital where we were told Ollie had, had a febrile convulsion. A seizure which is brought on by a high temperature. Ollie was able to come home the next day, we felt relieved, thankful and we believed that the nightmare was over, little did we know that this was just the beginning.

From then on Ollie began having weekly seizures but with no signs of a raised temperature. Doctors at our local hospital couldn’t work out what was happening to our little boy so we decided to take him to Manchester Children’s hospital in the hope of finding out what was wrong and of course most importantly making Ollie better.

In October an E.E.G was carried out confirming generalised epilepsy, Ollie was prescribed anti convulsive medication. Doctors decided to do a MRI scan which showed a small abnormality in the cerebellum, we were again reassured by professionals that this was nothing to worry about. Ollie was referred to a neurologist. By this point parents’ instinct had kicked in and we knew something was seriously wrong with our little boy. Ollie had yet more tests and we were left waiting for answers.

Though out all of this Ollie was his normal, happy and lovable self; he continued to attend pre-school and was thriving. Ollie could run, he was talking in sentences and had found a love in football.

A few weeks later we received a phone call asking ourselves to bring Ollie in to meet with the neurologist. Our gut instincts told us something was wrong but our brains said the doctors would not be asking us to bring Ollie with us if it was bad news.

The date the 13th February 2015, a day that will stay with us forever. I can remember the colour of the walls, even the smell. As we sat in that small room with Ollie on his daddy’s knee we were told that our child has Battens Disease, that there is no cure and that life expectancy is between six and twelve years. Ollie was just four years old! Our world fell apart in that moment. We were told Battens Disease was so rare that they had never come across a child with it before.

Please give whatever you can afford to help not only Ollie, but in the Battle against Battens... we have a little boy, and this story really hit home with us which is why we are not only supporting, but why I'm willing to have my ass handed to me by industry legend Fred Laing on the squash court all in the name of charity.

Thanks in advance, every pound counts.

My name is Greg and I work in the whisky industry as a marketing consultant, an author, and more recently a (very small) bottler of whisky too. More about what I do can be found here: http://www.GreatDrams.com. More on Ollie's Army here: http://olliesarmy.co.uk/the-story/