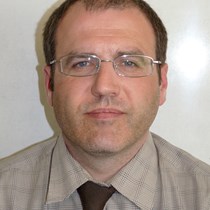 Weʼve raised £288 to build a new carriage shed at Gwili Railway to preserve and maintain our vintage carriages.

With the opening of the new Abergwili Junction extension, the Gwili Railway is now embarking on the next exciting phase of development. 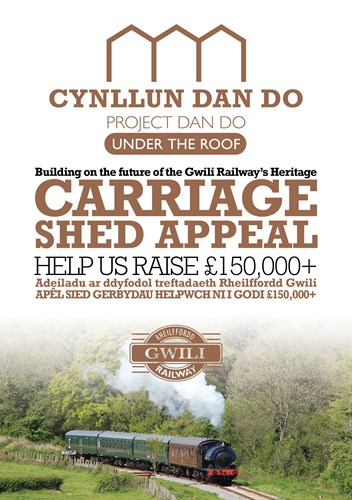 This appeal is for a project which combines practicality with preservation, an ideal balance of objectives to move the Railway forward. Like many heritage lines, the Gwili Railway makes use of the standard British Railways Mark 1 carriages. We use these for both regular services and our popular dining and cream tea trains. Keeping these carriages in working condition in the open is a difficult task. A storage facility is badly needed to protect them from the worst of the Welsh weather.

Some of these carriages have been in service on the Gwili Railway longer than with their previous owner. To allow them to continue to operate they need protecting from the elements. 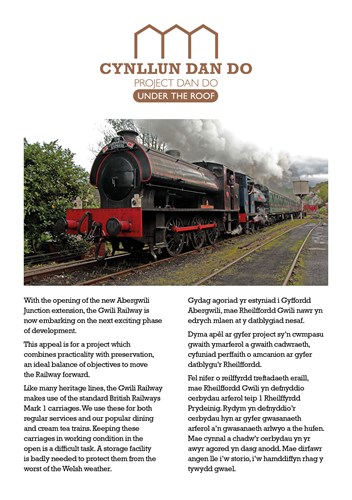 In 2003 the Railway obtained planning permission for a two-road carriage shed at Abergwili Junction. This shed is capable of holding the equivalent of four Mark 1 carriages on each road. The rails reached Abergwili Junction in 2017, now we have the opportunity to develop the site to include a carriage facility.

Since 2003 the railways collection of Victorian rolling stock has increased and developed. We have several historic items of stock which relate to Wales. The public display of such vehicles and artefacts is seen as essential in informing and educating our visitors of how railways impacted on our lives.

We therefore want to build the carriage facility to not only cover our Mark 1 carriages, but also items such as Taff Vale Railway No.28, the last surviving Welsh-built steam engine, on loan from the National Railway Museum.

In the collection we also have Taff Vale Carriage No. 220 of 1891. This once carried South Wales’ miners to work and is currently under repair. This is also the only railway carriage to hold a “Blue Peter Badge!” 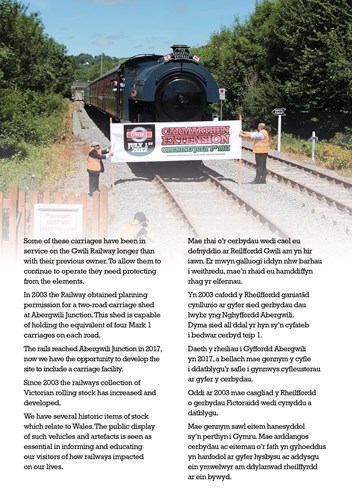 Equally fascinating is the Great Western Railway carriage No.216 of 1888. This was used for many years as a dwelling in Carmarthenshire and is now being returned to its former glory. With the carriage facility shed we also have a chance to obtain further historic Welsh carriages for display. 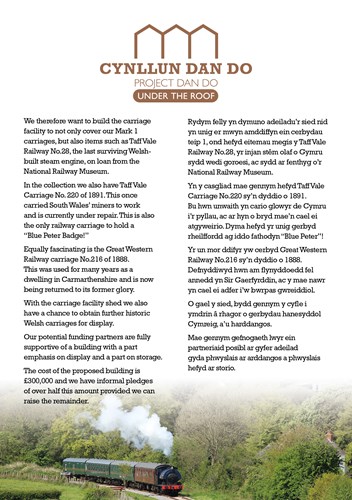 Our potential funding partners are fully supportive of a building with a part emphasis on display and a part on storage.

The cost of the proposed building is £300,000 and we have informal pledges of over half this amount provided we can raise the remainder. With additional grant applications being completed for some of the gap in funding we are therefore looking to raise a further £150,000 to complete the funding package and to allow construction to begin. 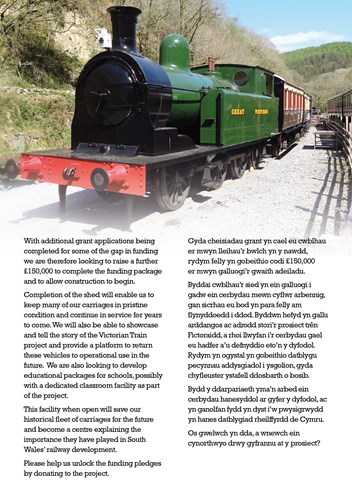 Completion of the shed will enable us to keep many of our carriages in pristine condition and continue in service for years to come. We will also be able to showcase and tell the story of the Victorian Train project and provide a platform to return these vehicles to operational use in the future. We are also looking to develop educational packages for schools, possibly with a dedicated classroom facility as part of the project. 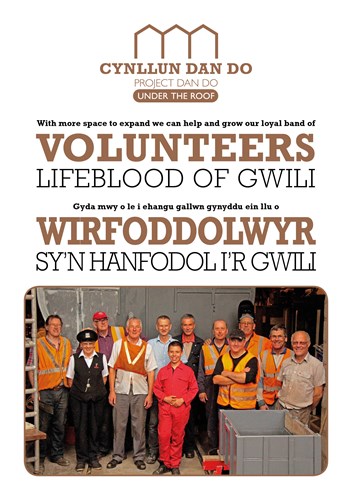 This facility when open will save our historical fleet of carriages for the future and become a centre explaining the importance they have played in South Wales’ railway development.

Please help us unlock the funding pledges by donating to the project. 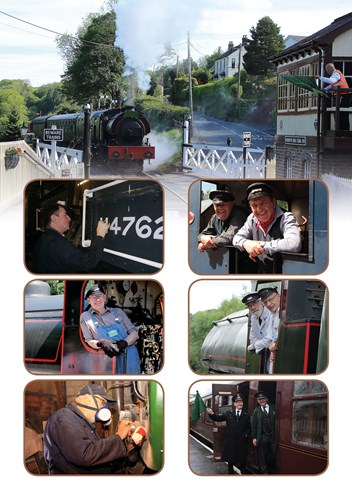 News from the Board of Directors - Project Dan Do

This is an exciting new project announced and launched at the AGM. The literal definition is “under the roof” and is the fund for a new carriage shed at Abergwili Junction. 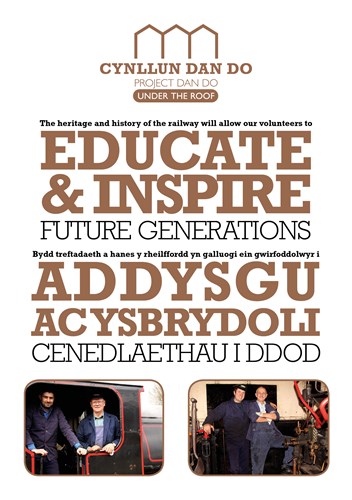 In summary, these are the main points-

What is the project?

A 300ft, 2-road carriage Shed at Abergwili Junction in line with the 2003 planning permission obtained

How much will it cost

What are the benefits?

A carriage shed to store our MK1 carriages (one road)

A display shed for the vintage carriages and TVR28, creating a point of interest at Abergwili (One road) 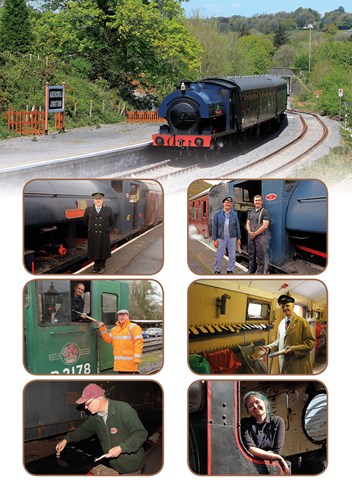 A basic form of road access to the Abergwili site

How will it be funded?

A supporter has very generously offered to meet one-half of the full cost. Therefore we have a big incentive to raise the remaining amount to see the project through.

£10,000 has been promised already by a supporter

A grant application has been submitted for £15,000 to Carms CC

Discussions have taken place with the HLF who are encouraging us to submit an application for £60,000 subject to educational content

An expression of interest has been submitted for a further £30,000 to another grant body

An appeal leaflet has been produced to launch a shareholder appeal, and we will also be advertising in the railway press. 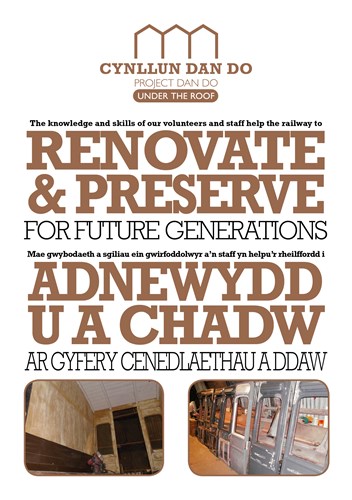 How can I help?

The appeal leaflet is available by calling 01267 238213. Please consider donating to the project. We have a tremendous opportunity to continue the development of the railway following on from the successful opening of the Abergwili Junction extension, but we need YOUR help.

If you have any questions about the project please contact Matt Bowen on matt78204566@gmail.com 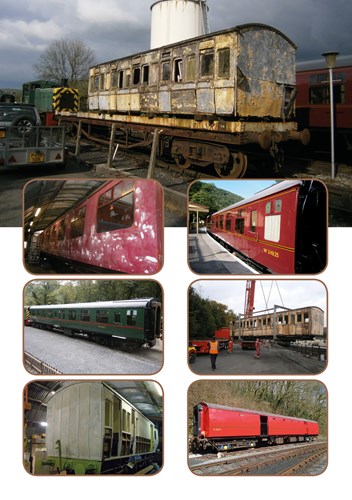 This is the most significant newsletter I have written. It comes in light of what was made known at the Gwili AGM railway meetings at Llanpumpsaint on Saturday.

The railway’s next major project is to build a carriage storage shed at Abergwili Jn.

This project has only become a serious reality as a result of a benefactor prepared to match every pound the railway raises with a pound of his own. You may wonder why not other projects like the Conwil Extension or the new road/car park at Abergwili Jn.

The benefactor is only interested in placing rolling stock under cover. Nationally, covered accommodation is becoming increasingly important in preserving operational rolling stock as well as conserving those vehicles yet to be restored.

The list of carriage sheds being built increases annually, just read the railway magazines and another railway somewhere is building another carriage shed. 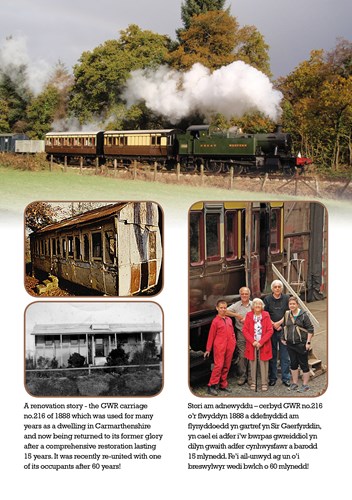 So why has this benefactor decided to help the Gwili Railway?

He isn’t a volunteer and may not even be a member or have visited the railway but our record over the last few years is persuasive, Abergwili Jn Extension doubling the length of the railway (imagine the West Somerset Railway going from 18 to 36 miles overnight).

The exacting standards we achieved installing the Bronwydd Level Crossing and the erection of a locomotive shed. We’ve achieved this ourselves, now is the time for a little assistance to help us go the next step.

The plan, which we already have outline planning permission for, is to initially build a two road, four coach long shed i.e. the equivalent of eight Mark 1 carriages. One road will be allocated to the Gwili Vintage Carriage Group to store the Victorian carriages and locomotive while the other road will be for the Company’s Mark 1 carriages.

To give an example of the benefit, the dining car set is now out of use from the first week in November until Mid-February. That’s 16 weeks in the worst weather, that’s a third of a year. It will be a storage shed not a workshop, the workshop for the foreseeable future will remain at Llwyfan Cerrig, but then six months ago a storage shed was beyond reality. If when further funds become available then the aim will be to continue covering vehicles and provide the support facilities for them at Abergwili Jn.

Discussions have taken place with Western Power Distribution to divert their overhead power line that spans the site at Abergwili Jn. Welsh Water have been on site to evaluate the problems with their strategic water main that crosses our land. Contractors have indicated how the site can be levelled. We have made contact with shed construction companies to see what they can do and what specifications we should be working towards. We have visited other heritage railways and met their managers to evaluate their best practice and their bad ones!

We are now in a position to move forward and produce a detail design that will bring the best of other railways’ experiences and can be the best carriage facility on any heritage railway. The invitation is there to anyone who might like to get involved in the detailed technical planning or if you have thoughts and ideas please let them be known. Over the years we have had several suggestions, drawings and sketches, all have been taken into consideration to get to this point.

The shed will reflect the architectural atmosphere of a GWR building and it will be designed and built so that other sheds can be added to it when additional funds become available. It will be heated using ground source heating technology, provision for solar panels to be fitted to the roof to supplement lighting and power and rain-harvesting for use in washing carriages and filling of toilets. 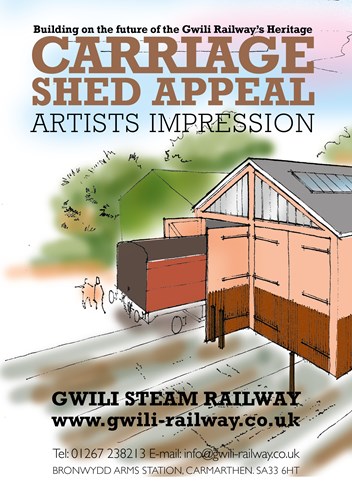 A renovation story - the GWR carriage no.216 of 1888 which was used for many years as a dwelling in Carmarthenshire. The 216 is now being returned to its former glory after a comprehensive restoration lasting 15 years. It was recently re-united with one of its occupants after 60 years!

(Please enter the full postal address of your Bank)

Hello everyone I work for the Gwili Railway as their Marketing Manager and as a director. I have created this page to raise funds for the new carriage shed so that we can preserve our carriages and trains for future generations.