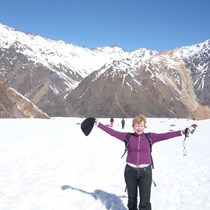 Sue is the director of Head for Heights Theatre Company, which during June-July 2017 will be premiering their next play at the Space, as well as running a series of workshops and presenting three rehearsed readings of Chilean plays.

'Mad Man Sad Woman' was written by Chilean playwright Juan Radrigán, winner of the prestigious National Performance Awards. Head for Heights' production at the Space is the British premiere of this moving and timely play, which deals with issues of marginalisation. The company will also run a series of workshops and activities for the local (Isle of Dogs/Tower Hamlets) community and youth groups.

Additionally, three rehearsed readings of new translations of Chilean plays will be presented in conjunction with Out of the Wings, directed by three London-based young Chilean directors: 'Superheroes' by Alexis Moreno, directed by Alejandro Franco; 'Medusa', by Ximena Carrera directed by Cristobal Pizarro; and 'The Workshop' by Nona Fernandez, directed by Camila Gonzalez.

In supporting Sue to run 10k, you will be helping the company to raise much-needed funding for purchasing equipment, set building, marketing the production, and providing training for local participants and new entrants to the industry.

Any donation, big or small, is gratefully received!

Tickets for Mad Man Sad Woman can be booked via https://space.org.uk/event-booking/?event=madmansadwoman

Sue Dunderdale is a trailblazing theatre director. Head for Heights explore and produce work by significant playwrights, mainly from Latin America. We have had the support of Arts Council England, the National Theatre Studio, Amnesty International, and King's College London.