Hands Off Wivenhoe raised £1,030 from 37 supporters 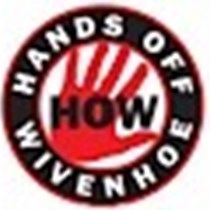 Weʼve raised £1,030 to support the Hands Off Wivenhoe campaign

Hands Off Wivenhoe is a group of local residents who want to make sure that Wivenhoe remains a distinct town and does not become a suburb of Colchester. The group was set up in response to Colchester, Tendring, Braintree and Essex County Councils' plans to build three large-scale developments in North Essex. This could include 9,000 new homes on Wivenhoe's doorstep, some built on grade 1 arable land.

Hands Off Wivenhoe's primary aim is to ensure that there is no building - residential or otherwise - south of the A133. The group also wants local infrastructure to be a priority in any new development.

All funds raised will go towards publicising the campaign and the fight to preserve Wivenhoe's unique and wonderful character. The campaign is ongoing but any funds left unused will be given to the Wivenhoe Mayor's fund.