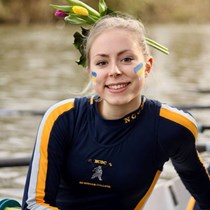 I HAVE SHAVED MY HEAD AND DYED IT PINK!

I really want to raise some money for Addenbrookes hospital, specifically the S3 ward. I suffered from anorexia nervosa and after being failed by the health system in London, I finally found help in the form of Addenbrookes. At my assessment appointment I was weighed and told that I was a mere 1kg over the weight for immediate hospitalisation. This meant that although I was on the verge of being critically ill, I had a potential 9 months wait before I would be seen as an outpatient.

This was not an option, as my mother said, I would have been dead before then. I am lucky, I was seen in time. For many others this isn't the case. Reaching out to those suffering from an eating disorder is particularly hard, what do you say? We need a medical professional to guide us down the track to recovery. I cannot thank the therapist that helped me enough, if it wasn't for her I would not be writing this plea for sponsorship right now.

I want to give others a chance to enjoy life again. I shaved my head on the 6th of December, all money raised will go to ward S3 (for patients with eating disorders) via Addenbrookes Charitable Trust. Please please donate and make me fulfil my goal of looking like an egg, all in the hope to break the stigma surrounding mental health and particularly eating disorders.

Many thanks in advance!

Make me look like an egg for a good cause!