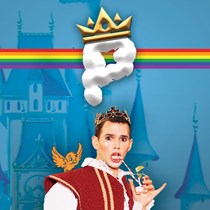 Happily Ever Poofter is crowdfunding

Weʼre raising £1,500 to support critically-acclaimed show "Happily Ever Poofter" with its INTERNATIONAL TOUR and in its fundraising for HIV charity Wandsworth Oasis

Back in 2018, after taking time out from his acting career to work in HIV support work and outreach, actor and activist Rich Watkins decided to combine his lived experience as a young gay man with his love of fairytales and Disney in a brand new one-man show.

The result was "Happily Ever Poofter: The Untold Story of a Gay Fairytale Prince"

The show first premièred at London's prestigious and historic Royal Vauxhall Tavern in April 2019. A whirlwind few months followed: London runs at Above The Stag (the UK's only LGBT+ theatre), The King's Head (London's leading Fringe theatre), headlining London and Hastings Pride and a sell-out run at Edinburgh Fringe Festival 2019.

After the success of Edinburgh Fringe, "Happily Ever Poofter" was offered a prime spot at Adelaide Fringe Festival, playing at Gluttony - one of the hottest venues at the festival.

Rich and his team are committed to taking story of Prince Henry and his journey of discovery to audiences around the world. Their goal is simple: bring joy. The story of "Happily Ever Poofter" has delighted audiences across the UK, and now it is Australia's turn.

However, touring to Australia is not cheap. The flights alone are enough to bankrupt a fledgling show like this!

Although "Happily Ever Poofter" is sure to succeed in Adelaide, there are lots of upfront costs, totaling around £2000.

We are looking to raise £1500 to get across the globe and entertain the audiences at Adelaide, and possibly beyond...!

Any donation will be so gratefully received. Help Henry to embark on his Royal WORLD Tour!