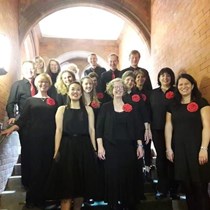 Weʼre raising £1,000 to raise awareness of the impact of racism on mental health.

HarmonyChoir has a new (online) concert scheduled for the 29th of November 2021! It will be hosted via Facebook Live at 7 pm GMT.

This time, we will be raising awareness of effects of racism on mental health and share some thoughts on how to be an active bystander.

The reason behind this event was that we wanted to support people we know, who have been affected by racism, either directly or vicariously.

All proceeds will go to anti-racist organisations: ESA Scotland, which provides (amongst others) peer-support sessions to the East and Southeast Asian community, and the Racial Justice Network, which provides bystander training free of charge.

The musical show will include short talks from (guest) performers and the two involved organisations.

The musical event is funded by the Society for Theatre Research.