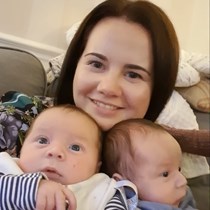 Katie and Ryan married on the 5th April 2014 at Checkley Church.
In March 2017, they welcomed Ollie into their family, a first grandchild for their parents.
In 2019, they discovered that they were expecting identical twins. This was particularly special news given that Katie's father Ant is also an identical twin. After a carefully watched pregnancy, with hundreds of scans (!) we saw the safe arrival of Harry and George in August.
Harry and George were a special addition to the family and are particularly adored by their older brother Ollie.
We have all taken great pleasure in seeing Katie and Ryan's family growing and they were (and still are) natural parents.

In May 2021, Katie and Ryan had some concerns about Harry and he was taken to see a doctor. It was quickly apparent to the medical team that he was unwell and in under eight hours, Harry was given a diagnosis of leukaemia.
After undergoing a bone marrow biopsy it was confirmed that Harry had Acute Lymphoblastic Leukaemia (ALL).

The Saunders family have shown tremendous courage and strength since Harry's diagnosis. However, a significant diagnosis like this does not come without it's challenges. Already, the family have been separated and are spending most of their time apart, with Katie primarily living in the hospital with Harry. Due to the nature of Harry's cancer, treatment is likely to last for a few years and during that time it will not be feasible for both parents to work. It will also involve travel to specialist centres and many inpatient stays.
For this reason, close friends of Katie and Ryan have organised this page so that they can focus on caring for all three of their boys.
Over the course of the year, many friends and family will be proposing activities to encourage you to donate, but at the moment we would appreciate your kindness to support the Saunders family.