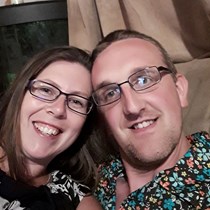 If you would like to get in touch wih us for anymore information please email me on tamsin.watson1983@gmail.com

Harvey was born premature at 28 weeks and because of that he had a bleed on the brain which resulted in hydrocephalus and he had to have a shunt fitted when he was just 3 months old. When he was 2 he was diagnosed with having Cerebral Palsy. He has learning and mobility difficulties and suffers with a lots of cramping pain and spasms in his legs. He has been getting stronger in his legs and he is able to get around with a walker and tripod stick for short periods, but it is a huge effort and he is battling his own body weight and as he gets bigger and heavier he may not be able to keep doing this. Can you imagine his heart break if all his childhood efforts go to waste and his body becomes to heavy. He has been offered an operation at Bristol Children's Hospital which is called SDR (Selective Dorsal Rhizotomy) which will take away the pain in his legs and ultimately make it so he will be able to stand and walk independently.

The operation will be carried out at Bristol children hospital but they are no longer funding it on the NHS so we are looking to raise the money for the operation, the intense physiotherapy which he will need after the operation and for any equiptment that might be needed to help with his progress.