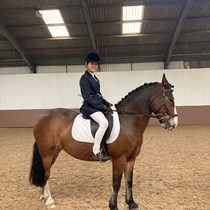 Weʼre raising £100 to raise as much money as possible to buy some fantastic new toys for the children’s play centre.

Children and youth
6 days to go

2020 has been hard for everyone but some more than orhers, this year one special little girl has had a pretty tough time and hasnt been feeling very well.

over the last few weeks Abbie has been feeling poorly with severe headaches, nausea and generally exhausted, she has tried to keep going to school but some days is just too tired. Abbie has had lots of tests and scans to check for a relapse and more tests agesd to fond out whats making ger feel so poorly.

on the day of her MRI scan (which must seem daunting when she had to stay still in a big machine for 45 minutes) Abbie got to soend some time in the hospital play centre whey they had lego models and VR which showed ger exactly what to expect when she went in there Which i know helped her emnensly.

Lisah and Mike, Abbies mum and Dad have also been through hell and back waiting for results, sleepless nights and generally worried that Abbie has been feeling so ill but even through all of this they are wanting to give something back to the hospital, the play centre are in need of some new toys. Abbie is 10 on the 27th November so Mia and I are trying to raise as much money as possible and we would love to suprise Abbie on her birthday with the donations so that she can choosecwhich toys to buy for the hospital.

i know things are tight fir lots of people so please only give if you can, every single penny counts and we are extremelly grateful to evetyone who can contribute as i know Lisah, Mike and Abbie will be too 💜