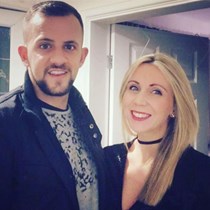 On Thursday 7th September 2017 my mums partner Steven Mahony sadly passed away whilst in hospital in Torrevieja, Spain. We are trying to raise the sum of £2500 in the next two weeks to lay Steven to rest and bring his ashes home.

My mum and Steve travelled to spain at the beginning of July and were looking forward to some sunshine abroad. Unfortunately, Steve had an accident which resulted in him going into a coma in Torrevieja hospital. My mum extended her stay and with the support of the 'help' charity and the british consulate in Alicante she managed to have regular visits with Steve.

Sadly my mum had to travel home and leave Steve which was extremely hard for her to do, not knowing if she would see him again but everyday weve had calls and updates on his progress. Its been a tough couple of months for us all but three weeks ago we got the call to say Steve had pulled through and had come out of the coma. Things were finally looking up and plans were being put in place for him to come back to the UK next week.

This was fantastic news and we were all looking forward to being reunited with Steve. Although we knew he had a long road ahead recovering, we would be there every step of the way. Sadly on Thursday evening we got the knock on the door from GMP to say Steve had passed away. This was devastating news as we all thought he would be back here in the UK next week. Unfortunately his body was too weak and he couldn't fight any longer.

Steve was a familar face around Urmston who worked at The Bent brook and was also a dj in The Brit (also known as Champs).

Over the next couple of weeks we are planning on setting up a local remembrance event for Steve where we can raise a glass in his memory.

Steve was a lovely man who enjoyed his music, his children and mum dearly. It has been a tough few months and now we hope we can say our goodbyes and lay Steven to rest. If anyone could donate and help, no matter how small the donation it would be extremely appreciated xxxx