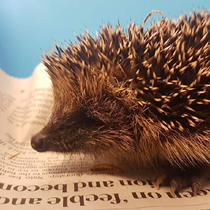 Did you know hedgehogs are an endangered species?

Even though counting every hedgehog would prove difficult, it is estimated there are fewer than a million hedgehogs in the UK! In comparison to the 36.5 million estimated in the 1950s!

South Yorkshire Animal Rescue are dedicated to helping hedgehogs thrive in the wild, where they belong. We are a charity based in Sheffield. People come from all over South Yorkshire to bring injured hedgehogs as there is simply nowhere else for them to go!

Quite often if you see a hedgehog in the spring, summer or early autumn, you are better off just leaving it alone as they can become stressed by human contact. However, if it is seen out during the day or wandering around in the winter then it most likely needs your help!

Fairly often a mother will abandon its nest if it is disturbed. These baby hedgehogs can then leave the nest looking for her – they will most likely be squeaking or have flies around them. In order for them to survive, they will need rescuing as soon as possible to avoid being prayed on by maggots! If you only find one, it is likely more are around somewhere.

Sick or injured hedgehogs are very susceptible to hypothermia. The best thing to do is fill a hot water bottle up (with hot tap water, not boiling) and wrap this in a towel. Place the hedgehog in a box on top of the bottle and then cover with a towel. It is very important the hot water bottle is changed frequently so it doesn’t go cold, to avoid causing further problems.

Baby hedgehogs need feeding every 2 hours. This can be very demanding and injured hedgehogs may require further treatment.
This is where we come in.

Please sponsor our urgent appeal to help us rescue as many as possible this winter.

The money raised will be to buy new bedding, food, housing and veterinary care until it is suitable to release them back into the wild.