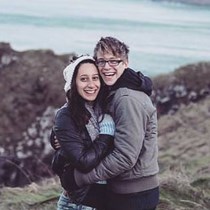 Kai is a year old, and was diagnosed with an incurable genetic metabolic condition- Non Ketotic Hyperglycinemia (NKH) a few weeks after birth. Its been a rough ride of seizures, hospital visits, developmental delays and end of life care.

We were told originally Kai was unlikely to survive, however we plan to celebrate the shizzle out of Kai's first birthday - one we weren't sure we'd ever get to.

Recently, we've come across two treatments which have proven to have outstanding results in other children with NKH. We hope that with it, Kai will have a chance at hitting some of those developmental milestones we've missed (like head holding, sitting, and if we're really getting our hopes up, walking and talking).

The first is Quantum Reflex Integration with Low Level Laser Therapy. It's done at home, and requires the purchase of a laser (which costs up to £5000). This treatment will hopefully help with some of those developmental issues.

The second is Neurofeedback Therapy - this is done at a local clinic in Battersea. Neurofeedback uses an EEG to assess Kai's brainwaves, and the therapy provides sensory feedback (with music or vibrating cuddly toys), to encourage a more stable brainwave pattern. We hope this help with raising Kai's seizure threshold, hopefully reducing the number of seizures he has. To be effective, it's been suggested we do at least 20 sessions, which will cost up to £1600.

Neither of these treatments are available on the NHS, and while there are charities who fund treatments and equipment, we've already used our charity allocation on equipment (such as bathing aids, a seizure monitor and additional medical equipment, like syringes and ng tubes).