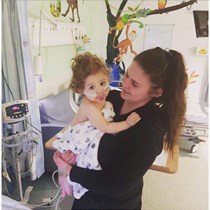 Thank you for spending time to read Ivy Louise’s story!

Childhood Cancer is something we have all heard in the news or read in magazines, but you never expect it to happen to one of your loved ones in your family, especially at such a young age! Our whole world fell apart when we got told our beautiful Ivy- Louise had Neuroblastoma Cancer at just the age of only 14 months.

Just imagine how much our whole lives have come crashing down. It’s been a whirlwind of a week- Ivy has had MRI scans, bone marrows, heart and kidney scans and also MIGB scans; this resulted in Ivy being diagnosed with a 6cm cancerous tumour above her adrenal gland. She has also had a feeding tube fitted in a Hickman line. Doctors and Nurses had hoped they had caught the cancer in time before it had managed to spread to any other parts of her body. We had everything crossed and hoped that this was the worst news we would encounter...

Unfortunately on Friday 12th January, they were told the devastating news no parents should have to ever listen too about their baby girl. Ivy’s cancer had spread all over her little body and even into her tiny bones. Neuroblastoma is a very aggressive cancer and the doctor had said it is one of the hardest cancers to cure; this has been a living nightmare for her parents Kerri-lee and Jamie who have remained so unbelievably strong from the very start. Despite this we are focusing on the plan in place and concentrating on remaining positive for this brave little girl. Ivy has started her chemotherapy treatment straight away which was also on the 12th January. Kerri-lee & Jamie, along with her family & friends are riding this journey with Ivy and taking each day as it comes.

She has been given a 50 percent survival rate that her treatment will make her all better. So whilst there’s still a percentage; there is hope for such a brave little fighter! We will never quite understand why this has happened to Ivy and why life is so cruel! I thought the main reason of creating this fundraising page would show all our support to Ivy, Kerri-lee & Jamie who’s got a very long unpredictable journey ahead.

So if you could all dig deep; this would be very much appreciated and just a small gesture that would help towards Ivy’s future needs. Nobody is sure how long Ivy is going to be on this journey for; it could be months, it could be years. So with your help to raise money it could support things like travel expenses for the hospital or simply it could give them all a break of a lifetime.

I would also like to say thank you for all your kind words and the support you have given Ivy, Kerri-lee & Jamie it is really helping them through all of this. Come on Ivy-Louise kick Cancers arse!