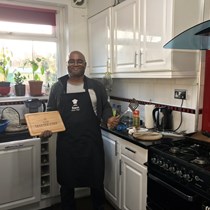 A brother’s love is a sister’s treasure.

Thank you for taking the time to visit our fundraising page. My husband and I are raising money for my brother Richard, who is 47 and has advanced metastatic bone cancer, caused by a late diagnosis of prostate cancer.

My brother Richard (Rich, as we call him) is the youngest of 5 children. Our father passed away at the age of 57, and although Richard is the youngest he and I have always shared a very special bond.

Richard was born in Croydon and has always been a “techy” guy for as long as I can remember. He went to Croydon College where he studied computer technology and got excellent grades.

In 1992 when our father passed away, he rekindled his relationship with his childhood sweetheart and they had 2 gorgeous boys together. Sadly, when the boys were only 4 & 2 their mother met someone else and left Richard and the two little boys.

Richard was absolutely devastated, but he knew he had to be strong for his sons. Richard brought up his boys only asking for help from our mother when things were so bad he didn't know what else to do.

In 2001 Richard met the love of his life Julie, and she instantly fell in love with the 2 boys as well. In 2003 they were married and they have remained devoted to each other, literally fulfilling their marriage vows!!

Julie had battled with cancer when she was younger and had to have a full hysterectomy. As a result, the couple were unable to have kids together.

In 2014, Julie was diagnosed with a brain aneurysm after suffering a seizure while at work. Her diagnosis meant she had to give up work as a nurse and focus on her health.

It was quite a shock for everyone when in 2015 Richard was himself diagnosed with advanced prostate cancer. This was so serious that within one week of diagnosis he was having a surgical operation for his prostate to be removed.

Richard is hardworking, loyal, responsible and a well-respected husband, father and brother. He is loved by all who know him not least because of his generosity and selflessness. But he is proud and finds it hard to ask for help because for a long time he was his family’s sole provider.

Richard has been forced to give up work and he and Julie now like to get out into their beautiful garden and potter around. Rich has found a new talent and when he is able to, he makes beautiful garden planters from wood he finds on their short walks with their dog Pepsi. He is very talented and I have been amazed at the things he has been able to make.

My mum is extremely worried and has spent the majority of her life’s savings paying for the additional treatment and surgery Richard has been having privately. As you can imagine, the cost of medical treatment has put immense pressure on the family. Their 2 sons are currently working tirelessly to help with costs. They are so dedicated to helping their father who had raised them single- handedly until he met his wife Julie, who lovingly took them on as her own.

For a little while he felt stronger and initial tests suggested the cancer had been dealt with. Unfortunately, further tests revealed the cancer has spread aggressively into the prostate bed and his radiotherapy results showed it had moved into the pelvic bone. This means that urgent treatment is now even more critical. Further tests also showed that as a result of the chemotherapy, Richard has now developed diabetes and extremely high blood pressure, which is complicating his condition further.

This illness is affecting the whole family. Those who love and support Richard are under a lot of emotional, mental and financial strain. It is very difficult to ask for help but we want to do all we can to help him & his family. That is why we have started raising funds through events and have set up this page.

So far, we have raised £1260 through other fundraising events, and will continue to do all we can. Your support really means a lot to us and the Hall family, so we thank you for what you are able to give.

Someone once said to me "take care of the pennies and the pounds will look after themselves".

All the money donated will go directly to Richard Hall to cover the cost of his ongoing treatment. Any amount, no matter how small will really make a difference. We are also looking into specialised cancer treatment and other options available in the UK and even possibly abroad.

As a big sister I have always had a soft spot for him, no words could describe the special love I have for him, he always understands my crazy ways, we always laugh and joke and people look at us and say "what's up with those two?"

He is a kind, loving and genuinely thoughtful person, and because I haven't been well over the last few months, when I call him to see how he is doing, he always asks me "is there anything you need, do you need me to help?" This just shows what type of person he is, always putting others before himself.

Finally, we welcome your prayers for our family, and thank you in advance for sharing this page with your friends and family.