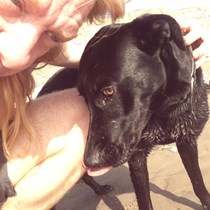 Weʼve raised £250 to support Lizzie's Barn Dog Sanctuary by running a 50 mile ultramarathon around the Epynt Way in Mid Wales on August 3rd.

I'm raising money for Lizzie's barn which is a small, completely independent, family-run rescue in South Wales. It really is a special rescue and where I found my dog Murphy.

So to help raise money for their costs and flood defences (see below) I am running a 50 mile ultramarathon around the Epynt Way in Mid Wales on August the 3rd. https://www.pegasusultrarunning.com/the-eddum/

The longest ultra I've completed has been 32 miles so far so this is quite a step up and challenge for me. I've been beset by injury and so training hasn't gone perfectly but I'm determined that I'll be getting to that finish line even if I have to crawl. Raising money for these special dogs is going to be a great motivator.

They don’t re-home hundreds of dogs like many rescues, that is because they take the harder to home dogs, the old, sick, neglected and abused; dogs that are simply less attractive to adopters, many referred on to them by other organisations as problematic in one way or another. So, they don’t have a fast re-homing rate and steady cash flow coming in; in fact, we rarely cover costs. Many of the long stay and resident dogs, collectively known as the forgotten ones, are now elderly and reaching the stage where they need regular veterinary attention.

On top of everything they have been faced with floods, turning the lane into a river and fields into lakes, essentially making them an island, inaccessible by motor vehicles and have faced flooding of all the outside areas adjacent to the buildings, and actually inside the barn – which has only flooded once before. We feel the only solution is to raise these areas so we are safe from future flooding. We also desperately need to continue to renew areas of fencing which have rotten after 20 years of sitting in flood water. This is really going to cost a lot of money.

I love dogs and after losing my beloved Soaky a few years ago adopted the wonderful Murphy from Lizzie's Barn last April. He has a few issues and is still frightened of people as he didn't have the best of starts in life but is loving his new life out running with me.