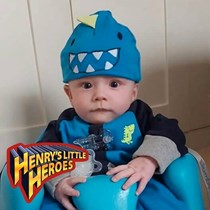 Weʼve raised £9,387 to Fund IVF so we can have a sibling for Henry and he can have his bone marrow transplant

Henry is our miracle baby (I have a brain tumour and was told it would be unlikely I could conceive) born in November 2015 after an incredibly difficult pregnancy and being given only a 20% chance of survival. He spent three weeks in the NICU and fought for his life but we had no idea why he was so unwell.

In March 2016, following 10 blood transfusions, a bone marrow biopsy and genetic testing, Henry was diagnosed with Diamond Blackfan Anaemia (DBA), an extremely rare genetic disorder meaning his bone marrow does not function properly so he cannot make his own red blood cells. Henry is unique, not only does he have a faulty DBA gene, but he is the only person EVER to also have a faulty myelodysplasia gene, making it more likely that he will develop leukaemia.

Since then, Henry has had countless procedures requiring a lot of time in hospital. He has to have a blood transfusion every 3-4 weeks to stay alive and daily medication to get rid of the excess iron stored in his organs but this is not a good long-term option for him. Henry's best chance at a long and healthy life is to have a bone marrow transplant.

Because of the risks involved, the doctors have said this is only possible if the transplant comes from a sibling who has the same tissue type as Henry (stem cells from the umbilical cord so no harm to baby!). This means we will need IVF to ensure the sibling is a match with Henry's cells and also does not carry the same gene mutations as he does. We always wanted Henry to have a sibling so ensuring we have one without DBA and also a match for Henry is a massive bonus! However, the NHS have refused to fund this so we have to raise the money ourselves.

Each cycle of IVF costs approximately £15,000 and on average, it takes three cycles to be successful, so we have a lot of work to do!

He has had such a fight for his life since day one and is the bravest, sweetest boy, please help us to help him keep fighting.