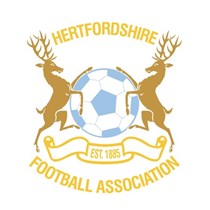 Weʼve raised £545 to Support Women For Women and Alzheimer's Society

To celebrate the UEFA Women's EURO taking place in England this summer, staff at Hertfordshire FA will be taking on an exciting EURO 2022 themed challenge aimed at raising funds for two fantastic charities.

Throughout the tournament, which is taking place from 6th July to 31st July, our team will be running, walking and cycling to cover the equivalent distance from where it all kicks off at Old Trafford, to the final at Wembley Stadium.

To increase the challenge this will follow a route that will also visit all the other venues across the country along the way! Split between our 15 members of staff, this will see us cover a total of 813 miles (1309 km), or around 228 miles (366 km) per week.

As well as being a way to share in the excitement of a home tournament, we aim to raise money and awareness for two amazing causes by asking the Hertfordshire football community to sponsor our efforts.

Money raised will be split equally between Women for Women International and The FA's Official Charity Partner Alzheimer's Society .

My thanks go to the staff team who have committed to raise money for these important charities. This will be a brilliant summer for Women's football so we hope to channel that positive energy into this challenge.

Being the Women’s EURO’s we wanted to show solidarity with a charity supporting women.

Being the Women’s EUROs we wanted to show solidarity with a charity supporting women. Women for Women help women survivors of war rebuild their lives, helping to empower over 531,498 women in war torn countries since they were established in 1993 and are already supporting a real time crisis such as the war in Ukraine. Whilst fighting for gender equality they also engage male allies, a notion shared here at Hertfordshire FA in our efforts to build equality of opportunity in football.

The Alzhiemer's Society is the FA's Official Charity Partner from 2021-23 . The charity is a vital source of support and a powerful force for change for everyone affected by dementia. It is estimated that by 2025, 1 million people will be living with the condition in the UK, while many millions more carers, partners, families and friends are also affected. Together with The FA, they are committed to understanding more about dementia including the causes and risk factors, particularly as it relates to sport.

Thank You for Your Support

As the Lionesses inspire women and girls across the country to follow their dreams and believe that anything is possible, we hope to inspire a football community to come together to support our efforts in raising money and awareness for these amazing charities.

We thank you in advance for your contribution

We are the not-for-profit, governing body of football in Hertfordshire. We want to ensure that everyone has the opportunity to play and develop their love of the game and are proud to support football for all