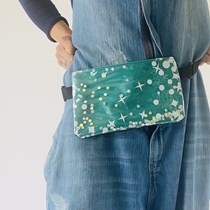 Since 2010 we have been salvaging bouncy castles and inflatables and turning them into sustainable bags and accessories, here in the UK

In 2017 we opened our Inflatable Amnesty initiative up to the public, to allow them to send in their broken inflatables, instead of sending them to landfill.

Since then we have received a large amount of media and press on a global scale, which has meant that so far we have swerved around 500 tonnes of these plastics in addition to shining some much needed light on this issue.

This has brought with it, its own logistical problems.

We used to pay for postage for these items to be posted to us. This was all boot strap funding...

Eventually the problem became so large, that we then paid TOWARDS postage...

It has now reached a scale whereby we can no longer accept items, if we don't manage to get some kind of funding to scale the initiative in a way that is large enough to deal with this HUGE [and ever increasing] problem.

When the inflatables arrive with us, they need to be washed, stored and processed, ready to be made into bags.

This process is enormously labour intensive. We used to be able to handle it under Wyatt & Jack, but now it has grown its own legs, it needs to be a separate company, with its own employees and logistics managers.

It has reached a scale whereby we can no longer continue to fund the influx and we're asking [hopefully] for enough funds for us to continue this work, as well as be able to expand into other countries and teach others the process.

Thanks so much for reading so far, if you can't afford to help right now [we know its been a tough year for everyone!] Perhaps you may be able to share this page, in the hope that it will reach people who may be interested too...

Here are some links, so you can read a bit more of our story x