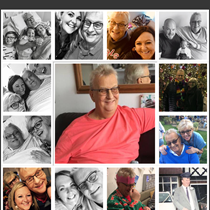 Weʼve raised £470 to In memory of Dad, any donations made by friends and family he wished to be donated to St Helier Neo Natal Unit 💙

Richard Fuller, (Dads brother), will be running each race circuit of this season's VWRacing Cup that includes Oulton Park on 22 April, Snetterton on 18- 19 May, Silverstone on 8 -9 June, Donington 22 - 23 June Brands Hatch on 6 - 7 July and 3 - 4 August returning to Donington for the finale on 14 - 15 September. The runs are planned after qualifying has finished on the Saturday of each weekend. His son, Howard Fuller ( Dads nephew) will be driving in the races in a newly built developed VW Golf. Some of their team mechanics and engineers plan to join Richard in the runs and he is hoping to be joined by other team, driver for a full on team effort

Richard and team have been training extremly hard by taking on several different challenges in the build up to the year ahead.

Richard is running in memory of Dad, Ken Fuller, who would be so proud of everything Rich and team are doing! Thank you!

All of the money raised will be donated to st heiler Neo natal Unit, which was a charity of Dads choice, which is where his youngest Grandson, Buddy was cared for so amazingly.