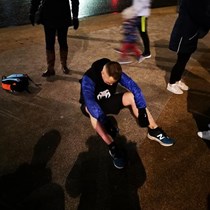 Weʼve raised £1,345 to Running 100 miles in 24hrs to Help the continual running and support of Martyn's Monday Club.

Hey there, if you’re reading this then I want to start by saying thank you for giving it the time to read👋🏻.

My names Innes Hughes, I’m your average 22 year old gym guy. In my life I had never ran a half marathon, or a marathon until last year when I set myself the task to run an Ultramarathon from FortWilliam to Oban which is around 50 miles in 12hours with only 4 weeks of training to raise money for Martyn's Monday Club. After setting off at 6am, I arrived in Oban 11hrs45mins later having completed the run in under the timeframe I had set myself.

Well now 1 year later, I've decided to set myself the challenge to not only run from FortWilliam to Oban again, but to run from Oban to FortWilliam beforehand...so overall equalling 100miles. Double the distance with roughly the same amount of time to train as last time - 4 weeks. People train 6 months minimum before they undertake such a task however I believe I can pull it off again with only a little training as I believe it's all in the mind.

Just a little bit of background on me...Back when I was in high school I was probably one of the unfittest people in my year for at least the first 4-5years, I couldn’t run the length of myself; I couldn’t do sit ups, i couldn’t even do a single push up at one point. I used to sometimes get slightly out of breath just walking up to the 4th floor to science. And with this came ALOT of negative comments from others, thoughts of myself from me, I used to hate looking in a mirror, I always struggled with self image. And with all these negative thoughts and actions, it made me into a very unhappy and ashamed person. Most of my high school years I could go as far to say as I was depressed, primarily from the way I felt and seen myself. So one day in 2014 I decided I wanted to change that and started to go to the gym with a member from the high school staff called David Ferguson who I have the UPMOST appreciation and respect for as if it wasn’t for him I wouldn’t even be a glimpse of who I am now. And he helped me start running, start lifting my own body weight, and every session usually ended with me puking or passing out in some form just from the pure intensity from the session which were before school even started.

Fast forward 6 years and I’m nothing like I used to be. I love the struggle, I crave for the hard sessions that you have to give everything in, the challenge of whether or not you’re even going to make it to the end. And the biggest thing is I like to challenge myself and put myself outside my comfort zone and to become comfortable in the uncomfortable. To go from struggling and almost breaking down at the thought of running for 10 minutes on a treadmill and most the time got off before the 10 minutes was up) to running 50 miles and now setting myself the goal to run 100miles in under 24hours.

I will be setting off for the run on Tuesday 29th December at 5pm and aim to finish by 5pm on the following Wednesday. I'll run with everything I need (food/drink etc) to last me in between the checkpoints that I'll have set every 10-15 miles.

And with mental health being a very serious issue in today’s world which is on the rise and is at a ridiculously high percentage in the UK alone, and for someone who has dealt with his own side of ups and downs, like I said I’ll be doing all this and raising money for Martyn’s Monday Club who has a man and women's group. A fantastic local support group for people who feel like they need help in any sense. So who better to raise money for than a charity that I can completely connect and understand with.

So for everyone who has took the time to read this, thank you!! And I hope you can join me in raising funds for a fantastic cause, whether it be a little or large donation-anything and everything counts and it would massively benefit this support group and all the great work they do for the community.