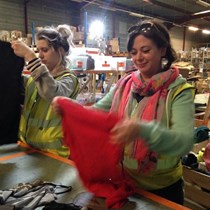 We will take your WONDERFUL cold hard cash to be spent by long term volunteers on urgently needed food for the 1,500 people in Dunkirk and sleeping rough round Calais, people seeking refuge from war and atrocities in their home lands.

The Calais crisis has been widely reported as over. Sorry to tell you, but it is just partly on hold. Not only are there still 1,500 people seeking refuge in a camp in Dunkirk, but not everyone got on the buses from Calais, some have gone into hiding. Katerina told us a terrible story about a church group who found some refugees hiding in the woods. The church group immediately got hot meals out to them... but the activity inadvertently led the police to them. The police watched as people hungrily ate this meal, then arrested them all to deport them. So now there is a huge feeling of mistrust, people are scared to get help. The need is there, but the systems of help put in place by volunteers have been razed to the ground along with the shelter of the camp.

One thing that is certain: the destruction of 'the Jungle' was not the solution, the problem will not go away, 10,000 people will not vanish. New camps will spring up, people will sleep rough, and the dignified and organised ways in which the charities get help to people will need to be reinstated. And the desperate need is still there.

Calais Kitchens distribute food that people can cook for themselves, affording some dignity in an otherwise undignified situation. But they are ENTIRELY funded by random ad hoc donations like this. If we look the other way, people will go hungry. Let's not look the other way. Thank you so much for reading, now donate your socks off you beautiful gigantic souls! X