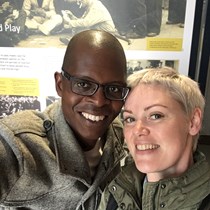 Diabetes and the Chibanda Family

Type 1 diabetes is a chronic condition in which the pancreas produces little or no insulin.

Northern Ireland has one of the highest rates of childhood diabetes in the world 1 in 350 children and unfortunately the number of children being diagnosed is increasing each year.

No one really knows what causes diabetes but genetics and some viruses have been linked to the contribution of type 1 diabetes.

Currently there is no cure for type 1 diabetes however insulin and new technology is making life a little bit easier to manage the condition and reduce the risk of future complications.

These complications effect major organs in your body including heart, blood vessels, nerves, eyes and kidneys.

The Chibanda family have 5 children between the ages of 22 months and 10 years old.

Their son Roman was diagnosed at the age of two years old. They have been living with the condition for two years now and during this time Roman was provided and funded through the NHS, Insulin Pump Therapy.

He was also given the opportunity to avail of a continuous glucose monitoring device called Dexcom G5.

This device changed their world!

They have gone from finger pricking 20 times a day when his blood glucose levels are unstable to 2 pricks a day as the Dexcom gives them the most up to date blood glucose readings with only a five minute lag time.

The Dexcom has inbuilt alerts which gives warnings day and night when Romans blood glucose levels are high but also when they are dangerously low.

This allows mum, dad and the school assistant to take prompt action to treat hypoglycaemia, hyperglycaemia and/or ketoacidosis.

Ultimately this system helps to alleviate the burden of diabetes management while improving the lives of people with diabetes.

However Romans funding for the Dexcom G5 has been terminated by the NHS due to lack of funds and the influx of new diagnosis of babies.

This is devastating for the Chibanda family!

To add to the turmoil their little 22 month year old girl, Meeka, was also diagnosed with type 1 diabetes two weeks ago.

They have been informed that she is on the waiting list for Insulin Pump Therapy, however the likelihood of her receiving the Dexcom Glucose monitoring system is low as the few machines have already been allocated and there is no additional funding.

At present she is enduring the constant finger pricks alongside the daily injections which she finds traumatic and painful.

To fund the Dexcom privately is very expensive and would cost the family thousands of pounds per year between Roman and Meeka.

This figure is out of the families reach as they are not in a financial position to afford but given that they now have two children with type 1 diabetes it is imperative that they have access to this equipment for each child.

This will ultimately improve Roman and Meeka’s quality of life and well-being but also the whole family can begin to look at life with positive tones.

As a parent, I can only imagine how hard it must be, not only the worry of the kids health but also the financial impact.

It would be great if we could help to ease that financial pressure.

Written by Via Lamont