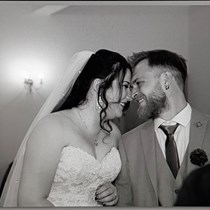 Weʼve raised £576 to help us to have a family through IVF.

Very few people know about the journey we have embarked on, this wasn’t due to lack of trust or embarrassment, it was mostly to avoid us adding extra pressure on ourselves. For those who aren’t aware, Thomas and I have undergone tests after tests and sought out advised treatment for infertility. There is so much stigma around this issue, and in some cases so much negativity. I guess this is why we have held off doing this for a little while. But it needs to be said, the stigma needs to be broken and we could do with a little helping hand. Earlier last year Thomas and I had all the testing, I had to have an operation (yet again!) and a hysteroscopy due to a polyp in my womb and suspected endometriosis. We were told however that the only possible way of ever starting a family would be IVF with ICSI and undergoing it sooner rather than later. We suspected this would be the case due to previous health issues and family connections to this journey, though this didn’t make it any easier to hear. As tough as it was, there was no decision to be made we knew this is what we had to do. This path wasn’t going to be easy but after everything we have been through we knew we could be strong enough. After the operation we waited six weeks for a referral, this time was spent googling the process, the time frame and tips to help success. We drove ourself a little crazy but it helped us feel more prepared for what we were about to go through. Our first appointment at the clinic came round, they confirmed what we had been told and referred us for MORE tests!

The early stages of this process feels like an eternity of waiting, waiting for results, waiting for a nurses consultation to decide the medication needed and protocol, then the waiting for my cycle to start so we could begin meds (which started late and delayed things further.. typical). We were put on the short protocol, which is usually 10-14 days of stimulation injections, due to the risk of overstimulation and complications associated I was prescribed a much lower dose. The first day was a total cocktail of emotions, excitement of getting started vs the daunting aspect of the injections. As much as he really did not enjoy the thought of doing so, the wonderful Thomas agreed to be the one to administer the injections. As most of you know, Thomas is an incredibly empathetic, sympathetic, thoughtful, kind man who feels things soo much harder than anyone else. He hated the thought of injecting me, hurting me in anyway but put that aside because he knew I needed him, I was just about strong enough to have the injections and experience the less than fun side effects but injecting myself I could not manage - most of you know I’m not the most coordinated of people, it could have ended up anywhere! The first day we were both a mess, I had a panic with tears and tantrums and once again this wonderful man alongside my siblings calmed me down and reminded me of why we are doing this.. because a mini him in the world is definitely an incredible blessing.

Day 1-5 was planned at one injection to be done at night, day 5- 11 would be 2 injections one in the morning and one at night. Not to mention all the other fun things that had to be done in between, pessaries and what not! It was such an emotional rollercoaster, but we remained positive that we would get our diddy. I don’t have the most fun with my ovaries on a normal month, but the heaviness and bloating was too much at times. Hosting for hormones enough to produce 19 eggs as opposed to one, I couldn’t have been much fun to be around for poor Thomas but he gave me so much strength. I responded to the medication a lot quicker than expected so egg collection was scheduled for the 20th of August. This procedure involves putting a long needle through the womb to the ovaries to collect the eggs. On this day Tom had to endure his part too. Again he faced this with such strength. Once done we had to wait till the next morning to find out how many survived. From nineteen collected, 12 fertilised. After this we didn’t hear anything until the day of transfer, when our little embryo would be put back. Our call didn’t arrive till we had set off for the appointment. We were told only one was viable as it stood, and they would keep the rest in the incubator an extra day to see if they progressed any more but the chances where we would only have the one chance. Hearing this just before transfer left us feeling a little defeated, however, we kept telling ourselves we needed to be positive for our one embryo. Transfer was over quick, it’s weird but from that moment we felt as though we were pregnant. As much as you tell yourself that you can’t get your hopes up, the embryo has so many stages to complete before it becomes a baby, you can’t help but feel connected to this tiny potential for life. Not only did we get to see the embryo on screen during transfer, we took home a video of our little one growing during the stages it was away from us. Despite it being only the size of a dust mite, and knowing nothing that I did could really protect or harm it we were both so careful. The doctors told me to empty my bladder straight after transfer and we looked at them like they were crazy!

The first week was bliss, filled with conversations about all our little ‘fugitive’ could be. We’d just moved into our new home, we’d kept what was going to be our nursery empty but from the moment of transfer we would go in and see it transform into our diddy’s space. No matter how hard we tried we couldn’t help but let our minds run free with everything we wanted from family life, this is the closest we had ever come to getting it. The second week brought us back down with a crash, I began experiencing pains and I knew it hadn’t worked. People kept telling us that these could be signs of it settling in, and my body kept tormenting us into thinking perhaps they might be right but deep down we knew that our little embryo hadn’t made it. This was confirmed in a pretty traumatic way before our test date, I won’t go into the details there but it wasn’t easy to deal with. The next couple of weeks we experienced feelings off loss, emptiness and as we were out of usable moves we felt in limbo. Everything we had to go through for this journey seemed as though it was for nothing, we had nothing that could be done now, we didn’t have any savings and we had used the only round we are entitled to on the NHS. Two weeks after our failed cycle we were discharged from the clinic as we did not have the thousands needed to do another round. We felt completely lost, no next step and no way to see past the thought we may never have a family of our own. Without the help and support of family I don’t know how we would have got through it.

It was through the wonderful support of family that we have decided to undertake a sponsored walk to raise money for another round. On the 23rd of February 2019 we will be doing a walk alongside our amazing family and friends from Leeds to Skipton along the canal. Anyone who wishes to join us are more than welcome and any sponsors would be much appreciated! If we are lucky enough to raise over our target, the extra will be split between Fertility Network UK and Tommy’s.org. Tommy’s.org raise awareness of baby loss and campaign to raise money to aid research and improve care and support those going through the heartache of loss.

Thank you for taking the time to read our story.