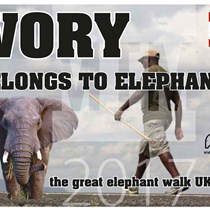 Weʼve raised £1,500 to to SAVE THE AFRICAN ELEPHANT. IVORY BELONGS TO ELEPHANTS!!

Our most iconic African species are being pushed towards EXTINCTION - killed by poachers to supply an illegal trade worth up to 15 billion pounds a year. On the front line of this war are Africa's ELEPHANTS, slaughtered for THEIR IVORY. Despite a ban, the killing is only getting worse - 30,000 are shot EVERY YEAR, at this rate we may lose this wise and emotionally intelligent animal within 25 YEARS.

THE GREAT LONDON TO BRISTOL IVORY BELONGS TO ELEPHANTS WALK 2017 is an initiative supported by The MTM AWARDS in conjunction with IVORY BELONGS TO ELEPHANTS and ELEPHANT NEIGHBOURS CENTER to raise awareness of the plight of the African Elephant here in the UK. The walk will be passing through keys towns and cities between London and Bristol to get the message across that we can and need to help stop the senseless killing of some of the most beautiful animals ever to grace our planet.

WE NEED YOUR SUPPORT to fund the walk which will help bring the plight of the Elephant to the forefront of the minds of politicians and the people of one of the most influential counties in the world. We feel that the UK can play a major role (more than it already has) in conservation in Africa.

Jim Justus Nyamu known as The Elephant Man, is the founder and executive director of Elephant Neighbours Center (ENC) an East African NGO that focuses on enhancing the capacity of communities living with wildlife to promote inter-linkages between spices and their habitats, has walked over 10,000KM across African and the U.S. raising awareness through the IVORY BELONGS TO ELEPHANTS campaign.

Based on population estimates and elephant trade information systems from a wide range of sources, shows a population decline from 2008 Namibia, Botswana, South Africa and Zimbabwe respectfully down listed their elephant population from Appendix I to II and now enjoy trade on ivory and on live elephants.

This is one of the reasons why Jim has decided to walk in the United States, Europe and Asia so as to take this awareness campaign to international communities that are still trading in ivory.

The London to Bristol Walk is the second international walk he has undertaken, and this is only the beginning as we hope to partner Jim and carry the message across all countries that still engage in Ivory trade.

“We have so much to do before the walk start that includes planning, fundraising, media interviews. I, however, ask for the support that includes networks in the UK to highlight this plight”.

THE ELEPHANT MAN IS COMING AND WE NEED YOUR HELP!!! PLEASE DONATE NOW!!!

I'm known as Junior. Born in Kenya and CEO of The MTM Awards. The idea came up when was in the National History Musem. I Want my kids ( like I did ) to see real wild elephants. WE CAN MAKE THE DIFFERNECE, IVORY BELONGS TO ELEPHANTS!! SUPPORT THE WALK. HELP SAVE THE ELEPHANT!!!