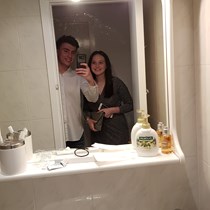 Weʼve raised £922 to Help the fight against cancer.

Sponsor Myself (Jack) and Megan!
We are taking part in events to raise as much money as possible to help support those fighting cancer and to help the research into cancer.

We are doing this in memory of my dad, Graeme Birmingham. He recently lost his fight against cancer after a short battle.

He was diagnosed with prostate cancer in October 2016, he was told the cancer had spread but was manageable, then found he had a very rare and aggressive cancer that rapidly took over. He sadly passed away December 2nd.

We have smashed our original goal of £300, so I have raised the goal to £1000!! Please help us reach and hopefully go beyond this goal!