Weʼre raising £25,000 to help people suffering from depression and other mental health issues, in honour, and in memory, of our son Jack.

A note to my son

I’ve cried every day since you left us. I miss you terribly, it’s like my heart has been ripped out my chest. But the main reason I cry is because I can’t stop thinking about how utterly awful the pain and torment you were suffering must have been to make you think this was the only way out.

The last time I spoke to you I put my hand on your shoulder, you were still half sleeping, and I asked some mundane questions about your new job. I’ll forever regret not telling you how much I loved you that morning.

We had many discussions over the three months prior to your passing. Despite how difficult those three months were, I’m at least thankful we got to spend them with you living back at home. Your self esteem was so low; you talked about being toxic and how everyone’s lives would be better without you. Your depression blocked you from seeing it, but in fact this was, and is, the complete opposite of reality.

I was never someone who believed in love at first sight. That changed in the early hours of the 19th of February 1995, when we met for the first time, all four pounds nine ounces of you. You changed my life forever. And now you’ve done it again. It’s unbearably sad.

I’ll never get to see you finish your degree, work overseas, have a family, travel the world; all the dreams you had. But I am so thankful for the 25 years we did share, Jack.

My love for you will never fade son, and until we meet again, I’ll see you in my dreams. 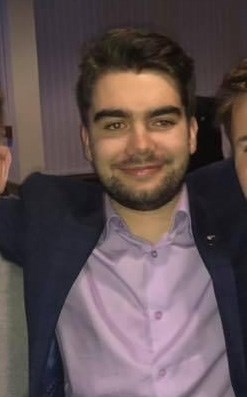 Jack Anthony Dore was 25 years old. Born and raised in Irvine, Scotland, Jack was a student at Edinburgh Napier University, studying for a BA (Hons) in International Tourism Management. He was due to graduate in Spring 2021.

In August 2019 he moved to Edinburgh and lived alone in a small flat, working on a part time basis in Marks and Spencer. Once the pandemic hit in March 2020 he became very lonely.

In July he moved to Glasgow to be a bit nearer home. Soon afterwards he lost his job due to cutbacks caused by the pandemic, then in early September he split from his girlfriend. He had a breakdown immediately afterwards and moved back home on what was hoped to be a temporary basis.

Depression set in and he attempted to take his own life on at least two occasions in the next six weeks. Crisis treatment was undertaken and additionally he was receiving therapy via a weekly telephone call. He would have much preferred in person treatment, but was advised this wasn’t possible. Also, he couldn’t go out socialising with his friends, something he normally enjoyed very much.

In early November he started a new part time job with Arco, in Glasgow.

Around lunchtime on 17 December 2020 Jack dressed for work, drove his car 150 yards from home, walked a few hundred yards to some woodland where he used to play with friends as a child, and sought his peace.

Many more are suffering like Jack did, and contemplate ending their lives every day. Please help us raise an initial sum of £25,000 so that we can work with mental health charities to ensure those in dire need of care are not missed.

We’d like to thank the people below for their help and support:

Megan - no one done more to help Jack in the months before his death than you. You truly are a special person; we almost certainly had more time with him because of your love for him. Also to your mum and dad, their strength is an inspiration.

Jack’s friends, especially Jamie, Sean and Scott, who he enjoyed many good times with in the past three years. And to the others who have been in touch who knew him from school, college or Uni.

Marlene - we know that the time he spent with you, here and in Texas, were some of the most enjoyable times of his life.

Our own friends and colleagues.

Father Boyd for the support and a beautiful service in honour of Jack.

Everyone at Co-op funeral care in Irvine, especially Elizabeth.

Karen, Malcolm, Jack and Lee Simpson, for their support and generosity.

And finally to every other person who has been in contact, either directly or via social media, sent a card, or sent flowers since Jack passed away. Everyone has been so incredibly nice.

We love you Jack, and miss you so much.