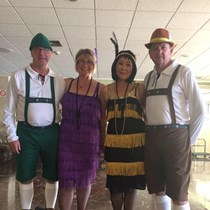 Weʼve raised £1,880 to To help Luke and Leanne with travel and living expenses , while Luke is critically ill .

On Wednesday the 21st December , my stepson Luke was involved in a motorbike accident due to no fault of his own .
Luke was actually brought back to life in the ambulance and taken to Luton hospital , then transferred to Addensbrooke in Cambridge as Luke has got a serious brain injury whilst there they discovered Luke's lungs has collapsed he is now and has been at papworth hospital on an Ecmo machine for his lungs , he is on life support , a kidney dialysis machine , Luke has also had to have a stent in his main heart artery as it was torn in the accident , he has had to have his left arm cut right through to the muscle because blood wasn't circulating and we thought he may lose his arm . Once Luke's lungs are working by themselves again he will be transferred back to Addensbrooke so they can work on Luke's brain and skull .
Luke is fighting as hard as he can , he has a long long way to go .
Luke won't be able to go back to work for a very long time , Leanne his wife has just started a new job so she will not get any money coming in , they have a 3 year old daughter aswell to look after oviously as a family we will all try and help Luke and Leanne but any extra would help Luke and Leanne so much .
Many thanks to everyone that has helped and prayed for Luke so far .