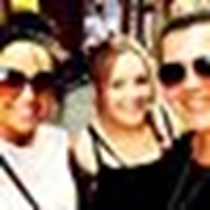 Jac was born at Ysbyty Gwynedd a day early on the 14th of July.

After a difficult birth, to our complete shock he was not breathing when he was born and was immediately taken to the Special Care Baby Unit. Within hours he began to have seizures. These would continue for the next 4 days, in total Jac suffered around 40 seizures.

What we now know is the seizures were a symptom of HIE (Hypoxic-ischaemic encephalopathy) a condition caused by a lack of blood and oxygen reaching a baby's brain, in Jac's case during his birth.

HIE occurs in around 1.5/1000 births and can affect all of a baby's organs, particularly the brain where a lack of oxygen can lead to brain injury causing physical disability and learning difficulties.

There is no cure for HIE, however in more severe cases there is a treatment which can reduce the extent of damage caused if given shortly after the oxygen depriving incident.

The treatment is known as Therapeutic Hypothermia and involves the baby being placed in a 'cooling mat' for 72 hours. The mat lowers the body temperature to 33.5, placing the baby in a controlled hypothermic state and as a result limits the extent of brain injury caused by HIE.

Jac was transferred to Ysbyty Glan Clwyd Neonatal Unit at 15 hours old to receive this treatment as currently there is no such equipment available in Ysbyty Gwynedd.

What happened to Jac was unusual but could happen to any baby. We have been very lucky, Jac is a healthy and happy boy and is not showing signs of any damage. Only time will if any permanent damage was done but what we do know is that without the treatment it is highly likely any damage would be significantly worse.

We will be forever in debt to all the staff at both Ysbyty Gwynedd and Ysbyty Glan Clwyd who looked after Jac. Our hope is that with your help we can go some way to repay this debt by helping Ysbyty Gwynedd to purchase a cooling mat to ensure babies born there with HIE are able to start the treatment without delay.