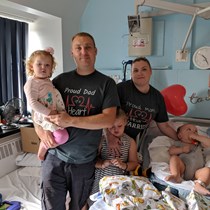 Weʼve raised £3,818 to be able to buy equipment that's needed for Jacobs development and fund stays in hospital

Welcome everyone and thank you for taking the time to read.

This is my son Jacob he was born 16th August 2017. When my wife was pregnant the doctors said that he has a inlarged artery but not to worry, when he's was born he actually has something much worse.

After he was born he was showing signs of distress and needed help breathing. Later investigation show he had something called TAPVD. The next day he was rushed to Bristol children's hospital for emergency open heart surgery.

I followed the ambulance to Bristol while my wife had to stay in treliske due to her having a emergency c -section, she was transferred to St Michaels where she remained for a fews days.

Jacobs surgery was successful but unfortunately post surgery he had a total left sided infarct, a stroke that has damaged 50% of his brain and also sustained damage to his brain stem, which contolls automatic functions such as his swallow and breathing.

As a result of the stroke it has left him very disabled and also has epilepsy. He hasnt got much use of his right arm and has a severe cerebral visual impairment due the the neurological damage. He relies on being fed through his gastrostomy and suffers constant illneses due to having a very low immue system.

Saying all that he does show signs of progress but we need help in trying to better his qaulity of life and need certain things that are very expensive, and constant trips to see specialist in Bristol also takes it's toll.

He will need more surgery within the next few months which means more time off work and that also takes it toll. My wife has to make serveral trips a week to the hospital every week for meeting with consultant and other health professionals.

We are wanting to raise this money for aids in development and a soft play mats so he's safe when on the floor doing physio also fund expensive trips to Bristol.

I'm a very proud person and it's taken me a long to to ask for help but I'm at the point where my family needs it.