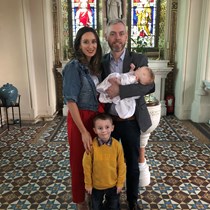 Weʼve raised £2,790 to donate to the PICU ward of the Royal Children's Hospital Belfast

Taran was born on 27/12/18 with a right sided congenital diaphragmatic hernia.Scans had shown his liver and bowels in his chest cavity, his heart pushed to the left side of his chest and his right lung severely under-developed. From his first scan at 23 weeks he was given a 50/50 chance of survival. Unfortunately for Taran only 10% of CDH cases are right sided which made his case more complicated.

As soon as Taran was born he was intubated and put on a ventilator as he was unable to breathe for himself. He stayed in the NICU in the Royal Victoria Maternity hospital until he was 4 days old and was then transferred to the Royal Childrens hospital for repair surgery.

After a successful surgery he remained in PICU for 5 weeks and 5 days. His CDH journey included Taran being re-intubated twice a second repair surgery where a patch was inserted, two blood transfusions, several central lines and infections that resulted in him being septic, in under 6 weeks Taran overcame it all to come home to his big brother and we all got to be together for the first time.

Taran had one more stay in hospital after all of this but he decided he liked being at home more. We will forever be so grateful to all the staff in the Royal Victoria Hospital in both the NICU and the PICU. Without them we would never have been able to have Taran home with us. We want to be able to donate to them to show our appreciation for all they have done for us. In the process we hope to raise awareness of this awful birth defect that takes the lives of 50% of babies diagnosed with it. All our love James, Helen, big brother Fynn and our CDH warrior Taran xxx