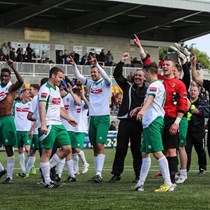 James Crane made his debut for Bognor Regis Town FC nearly 10 years ago away at Basingstoke Town and has embedded himself at the heart of all that is good about the club.

A player who was superb, despite our double relegation from 2009-2011 and he was even more pivotal in our successes from then on helping get the club back to the National League this season, but his chance to play at the level was cut very short in a home game vs Gloucester City in September, James fell dislocating his shoulder. The initial prognosis was quite positive but James now cannot play football again until he has had an arthroscopy stabilisation to correct his shoulder.

This can be done via the NHS but due to the current Flu epidemic "non-essential" operations are not being carried out and the operation may not be able to be done until the Summer.

Please give what you can to help this Rocks stalwart get back playing and doing what he does best in helping the club remain at this level. A private operation could be done within a fortnight.

James has played over 400 games for the club and has been involved in many pivotal moments - most notably his long range winner va Altrincham in the FA Toprhy run that culminated in us being just one game from Wembley.

Come on You Rocks - LETS MAKE THIS HAPPEN!!