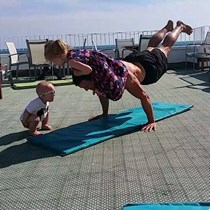 Weʼve raised £490 to be split between The Police Treatment Centre and offsetting some of the cost of competing at the World Police and Fire Games.

After missing out on competing in the New York Marathon last year due to a work related injury, I am excited this year to have been invited to compete in an entirely different fitness challenge all together, at the World Police and Fire Games, this August.

The Games is a gathering of Law Enforcement and Fire Personnel from all around the world, competing in various different sporting categories. I will be competing in the Elite CrossFit competition over a 2 day event, following the acceptance of my invitation from the Crossfit Games. I am the only male from the UK who was invited to compete in the Elite division, based on my worldwide performance in the CrossFit Open back in March of this year, where after 5 weeks of competition I finished 1st in Europe and 7th in the World in the Law Enforcement Category.

Despite this being very last minute and financially tricky and unplanned, as an experience and opportunity too good to turn down, I decided to accept the invitation.

Not one to shy away from a charity challenge, I was part of a team that raised over £2300 for St Peter's Hospice last year by climbing the height of Mount Everest in Rope Climbs: https://www.justgiving.com/fundraising/mount-everest-rope-climb.

I would also like to turn this fitness event into a charitable cause, by giving back to who has helped me.

Any funds raised through this page will be split between The Police Treatment Centre, and offsetting some of the costs of competing at The World Police and Fire Games.