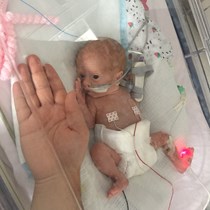 Ivy-Rose story - Ivy was born on the 19th may 2018 at 3:23am weighing 820grams. She was a 30+1 weeker gestation, With a few complications like the fluid being low, mature placenta & poor growth chart she was a emergency c section.

Ivy-Rose was rushed straight to speical care baby unit “SCBU” on the first day off life she was put in a incubator on a breathing machine called cpap to stable her breathing untill tests were run being 820grams was already a tackle for her but then straight away her blood shows she was “Anemic” her HB “Hemoglobin” was low she wasnt creating the red blood cells that she needed for oxygen. That morning i was told she needed a blood transfuison it was the best option for her at this point. Two days went by and things started getting worse she hadnt been to the toilet yet, and then from her NG tube that was sat in her stomach coming out off her mouth they was pulling up green asprits with a scringe thats when the worrying started was it “Nec” Necrotising Enterocolitis? This is known to kill babys i couldnt help but think the worse. This is when the royal glamorgan llamtrisant desided that she needed to be transferred to the NICU heath cardiff by day 3 off life.

When we got to the Nicu cardiff it was like a whole new world there was babys everywhere i couldnt believe it how could a unit deal with all this , loads of nurses and doctors all on the unit working all hours it was amazing i had hope this team just looked the part and the unit was updated it was spotless.

So at the nicu heath cardiff they desided soon as we got there she was having a X-Ray, Bloods, and a new feeding tube through her nose not her mouth. They noticed that her unbilical cord was red around the edges so it had to come out was this causing the upset stomach no one new so they carried on treating the Nec with triple antibotics and no milk for 14 days. with still no bowel movment they started to think was this a turn in one off the intestines this is when the consultants desided to get the surgery team involved. This is when they explained to us this surgery could be life threatning for a baby this small so they wanted to try other things before jumping in they started to do further investigating they put dye in her feeding tube and watched on X-Rays where it was going she had 6 X-Rays in that 24hours there it was flowing in the right direction. They desided to give her milk for the first time in 14days off her life even though it was through a feeding tube atleast she was being fed I guess. But lets not forget she was still stuck with this anemia haunting her she was still struggling to make them red blood cells so withing a couple off days she had another 2 blood transfusions. This was causing her to be tired and pale and just struggling with her oxygen level that kept her deasating on her monitor lucky enough she had a highflow in her nose blowing extra air in her lungs to give her a hand. The consultants took bloods every couple off days to make sure she was ok they had her a speical TPN bag made with all the nutrients she was missing in her blood every 48hours they would make her a new one. It was amazing these bags made speically for each babys. For 3 weeks she had all these nutrients running through her drip in to her long line and that just give her the boost she needed.

it was week 4 she was bursting with energy her milk was going up every couple ml every 24hours she was more awake and was being very fiesty. There was talk by the doctors that she was no longer a intensive care baby no more she was ready to move to the next stage to the HDU high dependency unit where the one to one care was no longer needed she was finally becoming the strong baby off the rooms. She lasted 24hours in high dependency unit and she wasnt this sickest baby in there either it was time to move again to low dependency the nursey i was so happy but at the same time so scared how has this little baby whos been here less than most babys jumping down the rooms heading towards the one step closer to home rooms.

The time come she hit the second part of the nursery but the bloods were done as they are every week and that HB was very low again they needed to start iron medication to help but they new she needed another transfusion she was so well in herself but that pale skin kept creeping back but it was time for her to go back to the royal glamorgan hospital to be discharged from her birth unit so they let the unit know about a transfusion and by week 5 shes had another transfusion. But she was bursting with energy this was like a new baby she started bottle feeding she had her first bath in 6 weeks and she was just doing amazing it was time to start the discharge by week 7 we said are goodbye to this scary chapter off ivys life and started a new one at home finally.

But the cardiff nicu heath still want to test her there going to do bone marrow test in october to finally get to the bottom off her anemia and sort the red blood cells out it was always a mistery to them why it was happening but there still going to try there best to get It looked in to. She will have on going blood tests untill she has the bone marrow fluid taken but for now we cant thanm them enough for everything they done for ivy and for all them other babys who are also fighting for there lifes. They accomidate parents so they can be close to there babys in a fab hotel thats in the hospital ground they make you feel like your one big family. The little things like making ivy a dairy and every shift a nurse will write in it what ivys day consisted in. By giving her clothes being that premature i didnt have anything and making her a clean bed everyday to keep germs away.

On fathers day they done a fathers card and put her foot print on the card they made us memory boxes with all her wires and masks in. They also just always kept us involved like teaching us how to do cares with a baby full off wires and tubes they like to get the parents involved so the bond stays strong. No matter how tricky with all the wires they made sure that i got to hold her much i could because skin to skin is very important.

This is why i would like to raise money for them because they take the very sick babys and they do every thing they can to help that unit has a new baby every couple off hours they deserve the best the team is amazing.