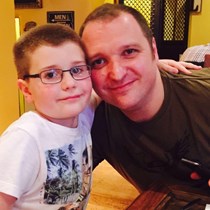 Alexander Goodwin is a nine year old boy who loves sharks, dinosaurs, birds of prey and anything to do with nature.

On 8th June 2016 the family had some terrible news that Alex had been diagnosed with Ewing Sarcoma of his right femur. Alex has been struggling with constant leg pain since Christmas 2015 and has used crutches since April 2016. He was initially misdiagnosed until finally being told it was cancer in June.

Ewing Sarcoma is a rare type of bone cancer that affects children. Fewer than 30 children in the UK develop Ewing's Sarcoma each year.

This week we have been informed that the cancer has spread and this has significantly reduced Alexander's prognosis and chances of survival. importantly it has reduced the treatment options available to Alexander on the NHS.

In order to maximise Alexanders chances of survival against this awful disease and give him the best possible treatment we are desperately seeking to obtain the support, knowledge and expertise of the leading medical professionals in this field here in the U.K and abroad. We also wish to ensure that we take advantage of the latest treatments of this type of cancer where appropriate including Proton Beam Therapy and other treatments that may not be available to Alex on the NHS.

Time is of the essence and we cannot afford any further delays so we must do whatever we can to speed things up and obtain the best treatment and this will cost money.

At present we are unsure as to the exact costs involved until comprehensive treatment plans are in place. in addition to this Just Giving account we are seeking to raise funds through the release of a music single & video and the sale of wristbands.

I am Alexander's Dad and a serving Police Officer. I have promised to look after him when I first set eyes on his 12 week scan.